Kenya: Superb Harambee Stars On the Brink of Afcon Return 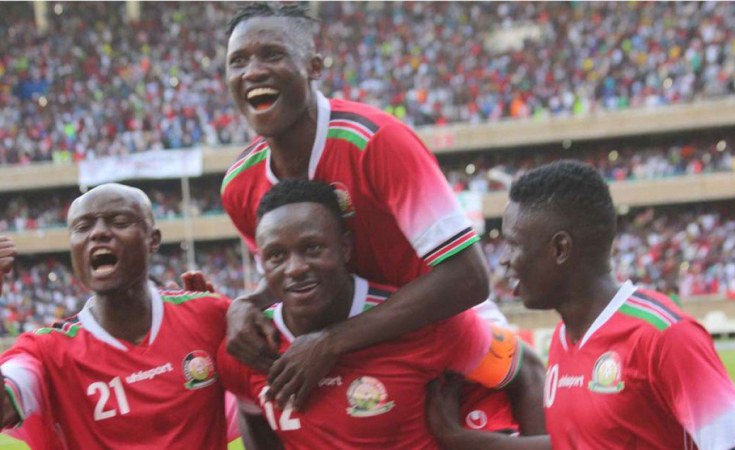 Harambee Stars moved close to booking a place at the 2019 Africa Cup of Nations (Afcon) finals with a convincing 3-0 win over Ethiopia in round four of the qualifiers played at a pakced Moi International Sports Centre, Kasarani on Sunday.

Japan-based striker Michael Olunga sent the mammoth crowd to wild jubilation on 23 minutes with a silky left foot curler that sailed into the far post after one two passes with Eric Johanna, who doubled the lead five minutes later.

Erick "Marcelo" Ouma, who replaced Ovella Ochieng' in the single change from the team that drew 0-0 in Bahir Dar on Wednesday, curled a lovely cross into the path of Francis Kahata, whose header fell on Johanna, positioned outside the 18, to plant a right-footed shot into the far post.

Captain Victor Wanyama put the scores beyond the Walya Antelopes' reach with a 64th minute penalty after Johanna had been tugged down by Ahmed Reshad.

Wanyama limped out on 71 minutes, as Belgium-based Johanna Omolo replaced him.

Victory for Kenya, their 15th in 44 meetings against the 1962 continental champions, stretches their lead on Group "F" to seven points, three ahead of second-placed Ethiopia, while four-time champions Ghana are third on three points similar to suspended Sierra Leone.

Should Sierra Leone fail to comply with the Fifa conditions by the next round of fixtures mid next month, then they will be expunged from the qualifiers, hence sealing Stars' return to the continental stage after a 14-year hiatus.

Stars got the ball rolling after Mauritian referee Ahmed Imtehaz blew the opening whistle and nearly opened the score sheets in the seventh minute, but Marcelo sent wide his attempt.

Ethiopia had their first attempt on 12 minutes through Getaneh Kebede, whose rasping shot from the edge of the box went begging.

Olunga almost netted a brace five minutes after restart after dispossessing goalkeeper Samson Assefa only for his goal-bound shot to be cleared by Ahmed Rashid for a fruitless corner.

Abud Omar had a promising combination with Erick Ouma down the left flank resulting to the third goal.

Ouma's cut back targeting Olunga fell to Johanna invading from the right flank before being being fouled by Ahmed to prompt referee Ahmed Imtehaz point to the spot as Wanyama sent Assefa the wrong side silencing a few Ethiopian fans.

South Africa Takes on Libya in Do-or-Die AFCON Qualifier
Tagged:
Copyright © 2018 The Nation. All rights reserved. Distributed by AllAfrica Global Media (allAfrica.com). To contact the copyright holder directly for corrections — or for permission to republish or make other authorized use of this material, click here.