Zimbabwe: VP Chiwenga On the Mend 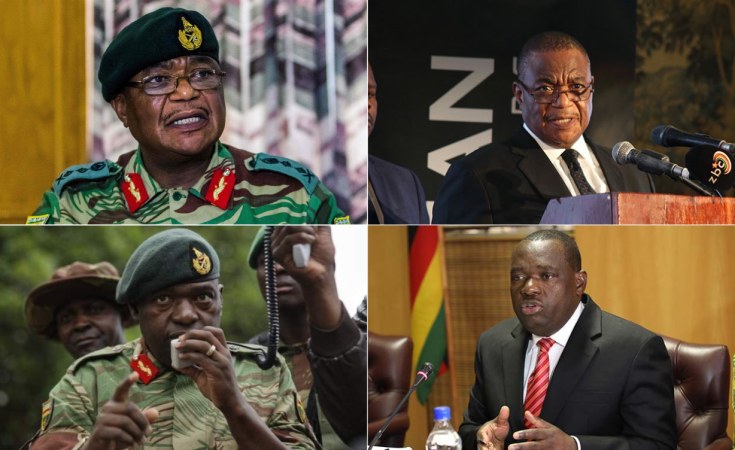 allafrica.com
VP Constantino Chiwenga and Minister Sibusiso Moyo were both army Generals before the military takeover that led to former president Robert Mugabe's resignation.
The Herald (Harare)
By Tendai Mugabe

Vice President Constantino Chiwenga is recovering well at a South African hospital where he is receiving some thorough medical attention on the effects of the Bulawayo bombing incident in June, Government has said.

Since the incident happened at the height of the July 30 harmonised elections campaign, VP Chiwenga could not receive thorough medical attention as he soldiered on to complete the campaign process.

Deputy Chief Secretary to the President and Cabinet, who is also the Presidential spokesperson, Mr George Charamba, told The Herald yesterday that VP Chiwenga was in good health and expected back in the country sometime this week.

He said President Mnangagwa had been communicating with VP Chiwenga and his wife on a daily basis from the time he flew out of the country last week.

Remarks by Mr Charamba comes in the wake of speculative reports on social media that VP Chiwenga's health had deteriorated and that he was in bad shape.

"Alongside VP Mohadi, Mai (Oppah) Muchinguri-Kashiri, General Engelbert Rugeje, Cde Mabel Chinomona and scores of other security personnel, General Chiwenga and his family were affected by the White City bombing incident," he said.

"It happened in the middle of elections so it was not possible for him to go for a thorough medical examination. After the elections, we had pressure of forming a new Government and again he couldn't go out for that examination.

"His wife, as you may be aware, went for medical treatment alongside other officials. A decision was then taken that now that elections are behind us, and also that the new Government has been constituted, the General should now go for a thorough medical examination.

"So he flew out last Tuesday alongside his wife who was also due for a review in South Africa where they then went for medical checks. And in the case of the wife, it was a review. Apart from the White City Stadium injury, the General was injured towards ceasefire in the Chiduku area in Hwedza and for a long time he had a bullet lodged in his lung.

"There is that historical problem yavagara vainayo over and above what happened at White City Stadium. That then made it urgent for him to then get that thorough medical attention I am talking about."

Mr Charamba continued: "Happily, the review has been done both for the General and his wife. The President has been constantly talking to the couple on a daily basis. Equally, I also spoke to them this morning (yesterday) and besides they went with Dr John Mangwiro, who is the Health and Child Care Deputy Minister, just to ensure that there is a Government medical official in attendance. Both General Chiwenga and Amai Chiwenga are in good health.

"They have been cleared except for some little problems that were detected and have since been treated. The VP is very well and when I chatted with him he ended up barking orders to me in respect of Kanyemba projects and in respect of the Bulawayo Kraal project in Binga.

"I said to him vakuru chimboteereraika muviri and he said no, no Charamba. He also told me of the plans he has because he was telling me that by harvest time this coming season we should never have any difficulties with cooking oil.

"So, uppermost on his mind are projects which are meant to revamp our irrigation infrastructure. Barring the unforeseen, we expect the couple back into the country sometime this week."

Massive Drug Shortage Hits Zimbabwe
Tagged:
Copyright © 2018 The Herald. All rights reserved. Distributed by AllAfrica Global Media (allAfrica.com). To contact the copyright holder directly for corrections — or for permission to republish or make other authorized use of this material, click here.