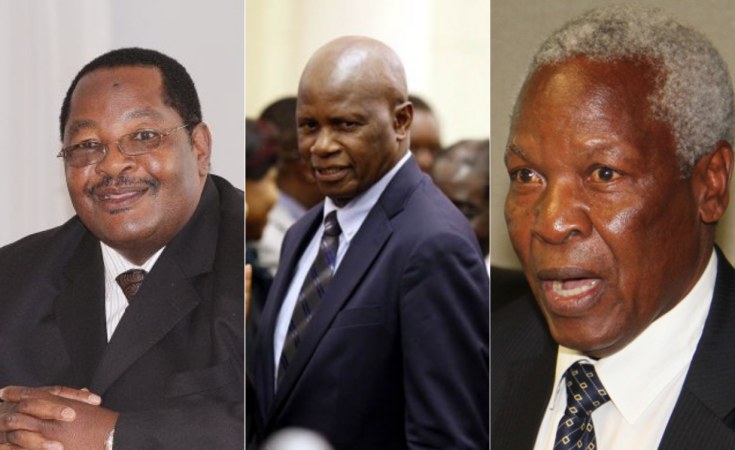 War veterans yesterday petitioned the Zanu PF leadership demanding the removal of former Cabinet ministers from their full-time positions in the party, threatening to remove the bigwigs from their offices if their demands are not met.

Rugeje, who retired from the army after the coup that toppled former president Robert Mugabe in November last year, is being targeted for allegedly failing to campaign for Mnangagwa ahead of the July 30 elections.

Chamisa has refused to concede defeat saying the election result was manipulated in favour of Mnangagwa.

The petition was signed yesterday by war veterans representatives from 10 provinces.

The war veterans claimed it was difficult to restructure the party when there were still some members aligned to the G40 faction, which backed Mugabe at the height of Zanu PF's succession wars.

The former fighters, who supported Mnangagwa during his tussle for control of the ruling party with G40, threatened to storm the Zanu PF headquarters to remove the targeted officials if the party failed to take action.

"Consequently, in pursuit of our constitutional mandate as custodians of the Zimbabwean people's revolution, as patriots, loyal and stockholders of Zanu PF, we demand, as we hereby do through the copy of this petition, that the following members relinquish their posts and vacate offices at the Zanu PF headquarters with immediate effect," reads part of the petition.

"Failure to do so, we, as veterans of the liberation struggle, shall force them out of the offices for the good of the people's revolution.

"Cde Obert Mpofu needs to clear the corruption allegations levelled against him before resuming office."

The war veterans said they wanted the Zanu PF commissariat to be overhauled immediately.

"Their involvement in the primary elections affected the president's performance in harmonised elections. It leaves us with more questions than answers where the President gets 50,6% while MPs could get more than 73%. We need an uncompromising team of dedicated cadres to take us to the 2023 elections," the petition added.

"Sekeramayi, Parirenyatwa and Chinamasa's unrepentant behaviour towards the new dispensation: Though we are not opposed to their ideas of having permanent appointments, these elements are known for factionalism and cannot be entrusted with such responsibility."

Other officials targeted by the war veterans include Munyaradzi Machacha, the leader of the Chitepo Ideological College, who is accused of staffing the college with G40 elements, and Dixon Dzora, who is accused of mismanaging the party's resources.

"We are warning all the provincial leadership with G40 attitudes to either shape up or ship out," the war veterans warned.

"We strongly warn all provinces who purged or are purging war veterans and other bona-fide party members to reinstate them immediately and unconditionally.

"Failure to do so, veterans of the liberation struggle shall descend on those deviant provinces."

Muchinguri demanded questions in writing, but had not responded to them by the time of going to print.

Zanu PF spokesperson Simon Khaya Moyo referred questions to war veterans spokesperson Douglas Mahiya, who said he was not aware of the petition.

Has Mnangagwa Abandoned Zimbabwe's War Veterans?
Tagged:
Copyright © 2018 Zimbabwe Standard. All rights reserved. Distributed by AllAfrica Global Media (allAfrica.com). To contact the copyright holder directly for corrections — or for permission to republish or make other authorized use of this material, click here.