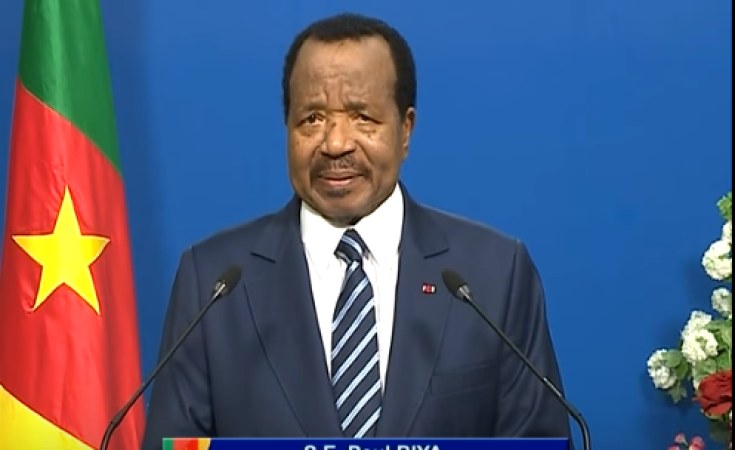 Biya's victory was widely predicted following an election marred by allegations of fraud. But the government's crackdown on influential activists suggests Biya's decades-long hold on power may be slipping.

Cameroon's longtime president Paul Biya is set to remain in office for a seventh term, with the results of the October 7 election revealing he won with more than 71 percent of the vote.

The results, which were officially released on Monday, October 22, did not come as a surprise to many, following an election marred by accusations of rigging and ongoing violence in the country's English-speaking regions, where a separatist movement has sparked a brutal government crackdown. Only 53 percent of the country's 6.6 million registered voters actually cast their ballots.

Joshua Osih, from the main opposition party the Social Democratic Front (SDF), had already requested the cancellation of the whole election before the official announcement. The Constitutional Council rejected the appeal, along with 17 others, meaning the final results can no longer be challenged. Another opposition candidate, Maurice Kamto of the Cameroon Renaissance Movement (MRC), had meanwhile already declared victory shortly after the polls closed, while votes were still being counted.

In the lead-up to the announcement, troops were deployed throughout the country's major cities in anticipation of a wave of violence.

African Union election observers said that the polling was largely successful, but they could not monitor elections in the restive southwest and northwest regions of the country.

Biya, 85, has held office for 36 years and is Africa's oldest leader. His current mandate allows him to govern until at least 2025 when he will be 92 years old. Nicknamed 'The Sphinx,' Biya became Prime Minister in 1975, but exactly how he managed to secure the top job from his predecessor, President Ahamaduo Ahidj, remains a mystery.

Angry protesters took to the the streets of the capital Yaounde even before the official results were announced, claiming Biya and his Cameroon People's Democratic Movement (CPDM) had stolen victory from Maurtice Kamto of the Cameroon Renaissance Movement Party. Kamto came in second with 14 percent of the vote, ahead of Cabral Libii of the Universe party with 6 percent and Joshua Osih of the SDF with 3 percent.

"We want justice. We should not only preach democracy, we should practice it as well," Kamto supporter Augusta Bates told DW. "Even Biya knows Kamto [really] won this presidential election, so he should just let him take over power," Bates alleged.

Osih of the SDF party remained steadfast in his condemnation of the election.

"History holds it that what happened on October 7 was worse than anything [we have] witnessed before," he said. "It was everything except an election."

However, Dion Ngute, a close aide to Biya and Minister of Special Duties, sought to portray the president in a more positive light in the wake of the backlash.

"We know [Biya] is a man who is very persevering, a person who is very patient, one who is very honest and who is candid," he said. "The man is peace-loving and wants good for Cameroon."

Over the weekend, government troops were seen at the homes of a number of opposition candidates, journalists and political activists, including Kah Walla, president of the Cameroon People's Party (CPP).

Dozens of riot police -- some armed with machine guns --surrounded Walla's house on Sunday, effectively placing her under house arrest without due cause. Walla believes it was a clear sign of the government's increasing nervousness over growing discontent.

"I believe that government officials are very scared about the fact that Cameroonians are going to rise up against this charade that they have pulled off for the umpteenth time," she says. "They are also afraid of leaders like myself who continuously inform the population of the fact that non-violent protest is a right ... This morning they [sent] out text messages to millions of Cameroonians saying exactly the contrary, which is against Cameroonian law."

Troops were also seen outside the residences of opposition candidates Kamto and Libii, who had both urged Cameroonians to speak out if they felt cheated by the election results.

Change on the horizon?

Despite Biya's apparent landslide victory, Walla is optimistic that Cameroon will soon undergo a political transformation.

"This clearly shows that this regime knows that they have not won by that kind of a margin, or that they have not even won at all," Walla told DW. "I think that we are going to see Cameroonians mobilizing and organizing protests because the population has reached a point where they don't want to take this lying down anymore."

She is also confident that it can be achieved by peaceful means.

"We do not want disorder in our country, we do not want violence and mayhem," she says. "But what is also clear is that we are not going to back down in the name of some fabricated peace which the government often puts out there."

However historian Ndifor Richard believes Cameroonians can expect more of the same for the next seven years, particularly in the conflict-ridden Anglophone regions.

This year's election took place against the backdrop of the ongoing Anglophone crisis in the country's northwest and southwest regions, where there has been an eruption of clashes between armed separatists and troops over the past year.

Turnout in the country's English-speaking regions was extremely low -- only 5 percent of the 625,000 registered population in the northwest came out to vote, while just 15 percent of the 374,000 voters in the conflict-ridden southwest region made it to the polls.

When appealing the results, Osih argued that the election "didn't take place" in these areas because of the dangerous security situation. Hardline militants had even warned people of harsh reprisals if they were caught voting at polling stations.

Biya has been criticized for ignoring the worsening situation in the Anglophone regions during his election campaign.

"For over a year, the plea by many Cameroonians -- including Francophones -- has been for Biya to open dialogue as a solution to the Anglophone crisis," Cameroonian journalist Relindise Ebune told DW. "He has [remained] deaf [to this] so far ... [Biya] should come to the dialogue table where this problem can be solved and Cameroon will once again be a peaceful country."