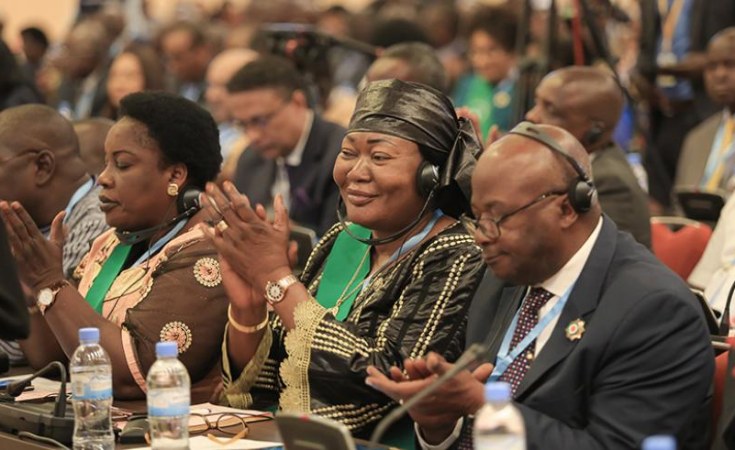 President Paul Kagame on Monday urged the Pan-African Parliament (PAP) to facilitate the speedy ratification of the African Continental Free Trade Agreement (AfCFTA), the Protocol on the Free Movement of Persons, and other key pillars of the continent's Agenda 2063.

President Kagame, who is also Chairperson of the African Union, sought the support of the continental assembly as he officially opened the two-week session of PAP in Kigali.

Signed in Kigali on March 21 this year, the AfCFTA is a trade agreement initially endorsed by 44 AU member states, with the goal of creating a single market across the continent.

Pan-African parliamentarians at a session in Kigali yesterday. Kagame challenged them to drive the implementation of AfCFTA.

During his remarks, Kagame commended the breadth of the Assembly's agenda for their Kigali session, which includes a session on women rights, reports on nutrition, corruption and the African Peer Review Mechanism among others.

Kagame said: "The impact of your work in this body is multiplied by your dual role as members of your respective national legislatures. We count on you to be strong advocates for African integration.

"More specifically, I would like to ask for your support for the speedy ratification of the African Continental Free Trade Agreement, the Protocol on the Free Movement of Persons and other key pillars of Agenda 2063."

Agenda 2063 is a strategic framework for the socio-economic transformation of the continent over the next 50 years.

Kagame noted that the entry into force of "these historic compacts" will do more to accelerate economic growth and depart from the outdated perceptions of the continent.

"We cannot afford to squander the momentum we have gained. But we need your help to communicate more effectively with constituents and stakeholders in civil society about the importance of these agreements for the well-being of our citizens and our economies."

State of Africa and AU

President Kagame also talked about the state of Africa and the AU, where he noted that important changes are underway on the continent, and in the wider world, "and we have to be ready to meet them."

He said: "It is about getting our house in order, doing what is right for our people, and speaking with one voice to advance Africa's interests. Working together is the only way to give Africa's position the weight it should have in the wider geopolitical context."

At the same time, Kagame said, illusions of moral hierarchy that divided continents and peoples are crumbling rapidly.

Responsibility for Africa's security and prosperity is and should be firmly in Africans' hands, he said.

"We must meet the imperative of good governance with innovations and solutions drawn from Africa's rich experiences and cultures, even as we remain open to benefiting from the best global insights."

This reality, he said, is the background to the financial and institutional reform of the AU that has been underway for the last few years, making the Union stronger than ever.

"Next year's budget (for the African Union) is 12 per cent smaller, while the share of funds supplied by Member States has significantly increased," Kagame said.

Contributions to the Peace Fund are running at the highest level since its creation in 1993, he noted, allowing Africa and its partners to push for an ambitious new partnership with the UN that will provide stable funding mechanism for peace support operations.

In 2016, the AU Assembly decided to institute a levy of 0.2 per cent on eligible imports to each of the member states, in order to address funding challenges it faced since its inception.

The Assembly later decided to operationalise the Peace Fund, in order to finance the peace and security operations of the Union, through the provision of $65 million by each of the continent's five regions per year through the import levy, increasing to $80 million per region by the year 2020.

"Next month, we will convene in Addis Ababa for an Extraordinary Summit to finalise implementation of the institutional reform, where we have also seen good progress this year. We very much welcome your active participation and engagement in this process," Kagame said.

Noting that PAP's lawmakers are much more than interested observers, Kagame thus called on the continental Parliament to "play a bigger role" in monitoring and accompanying political progress on the continent and holding institutions to account for the commitments they made to Africa's citizens.

Combatting corruption is high on the agenda of the first Ordinary Session of the fifth PAP - which ends on November 2 - under the theme: "Winning the Fight against Corruption: A Sustainable Path to Africa's Transformation."

The President of Pan-African Parliament, Roger Nkodo Dang, said: "Corruption is not just an obstacle, it is gangrene. A gangrene which starts from a major dysfunctioning of the individual: how can a leader, a politician, a public official use public power for his or her own private interest?"

He stressed that combating corruption, for the PAP, must be an absolute priority, because corruption's economic and human consequences are destabilising.

"Infant mortality is twice higher in countries where corruption is rampant. The rate of school dropouts is five times higher and the infrastructure is subjected to constant dislocation and collapse."

Africa's Free Trade Deal 'Could Be A Reality by March 2019'
Tagged:
Copyright © 2018 The New Times. All rights reserved. Distributed by AllAfrica Global Media (allAfrica.com). To contact the copyright holder directly for corrections — or for permission to republish or make other authorized use of this material, click here.