Harare — The government has, with immediate effect, removed a ban on imports of basic commodities as Zimbabweans battle acute shortages which the administration blames on panic buying.

A full cabinet resolution taken Tuesday is that Statutory Instrument 122 of 2017- Control of Goods (Open General Import Licence) will be temporarily repealed until the situation normalises.

"Cabinet notes with concern that the basic commodities continued to be in short supply despite increased production by suppliers' thereby reflecting persistent panic and speculative buying'" reads the resolution.

Information minister Monica Mutsvangwa confirmed the development at a press conference in the capital Tuesday.

"The Minister of Industry and Commerce temporarily amend Statutory Instrument 122 of 2017 to allow both companies and individuals with offshore funds and free funds to import specified basic commodities currently in short supply," she said.

"This is going to be done pending to return to normalcy in buying patterns of the public and adequate restocking and manufactures."

Finance minister Mthuli Ncube suspension of the ban would help improve the availability of basic commodities.

He explained; "All we are doing is increasing supply of commodities and allowing those with offshore funds and free funds to buy whatever they want to buy and bring it in. What's wrong with that"

"It's not the first time we are doing it; we did in 2009 when we were coming from a hyper-inflation era and we learnt some lessons, but it is also basic economics."

Responding to questions, he added; "We don't have to know at what rate you get your money or dollar; it's not our business.

"What is our business is to make sure that you have food on the table and (whether) you bought it from South Africa we will not stop you from bringing it in (even if it's) at a lower price than you would have gotten it here."

The ban was introduced in 2016 to help local manufacturing recover after more than a decade of contraction.

Products such as cement' bottled water' animal oils' body creams' cheese' cereals' ice cream' wheat flour and cooking oil' to mention a few' can now be brought into the country by individuals.

However' government's biggest challenge' fuel' is not on the list. Only five companies have the right to import fuel in Zimbabwe.

In recent weeks there has been a shortage of particularly cooking oil which normally retails for $3.35 (bond notes) for two litres but has been surfacing on the black market for $15 (bond notes) or an equivalent of US$4 in either South African rand or Botswana pula.

Most products on the grocery list were found in supermarkets such as Pick n Pay' which commands a majority share of the grocery retail industry. As such' allowing people to import privately' government said' means that price hikes will not be justifiable.

But local manufactures feel the move will affect them negatively since the instrument was put in place to protect local industries.

"It will create more pressure on the parallel markets and 'street rates' will hit 10 on the back of increased demand to satisfy new import lines'" Busisa Moyo from United Refineries' a cooking oil manufacturing company' said.

The ruling Zanu PF party's youth league claims the shortages that triggered the government's decision were caused by "economic saboteurs and forex hoarders". 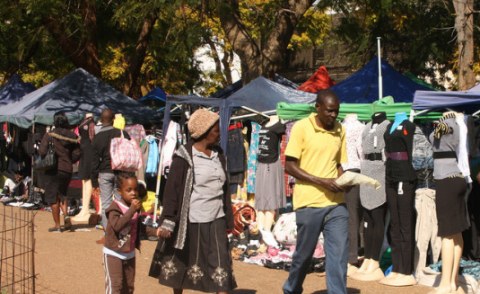 Zimbabwe Under Pressure Over Imports Ban

Chamisa Now Willing to Talk, But Is Mnangagwa's Door Still Open?
Tagged:
Copyright © 2018 New Zimbabwe. All rights reserved. Distributed by AllAfrica Global Media (allAfrica.com). To contact the copyright holder directly for corrections — or for permission to republish or make other authorized use of this material, click here.