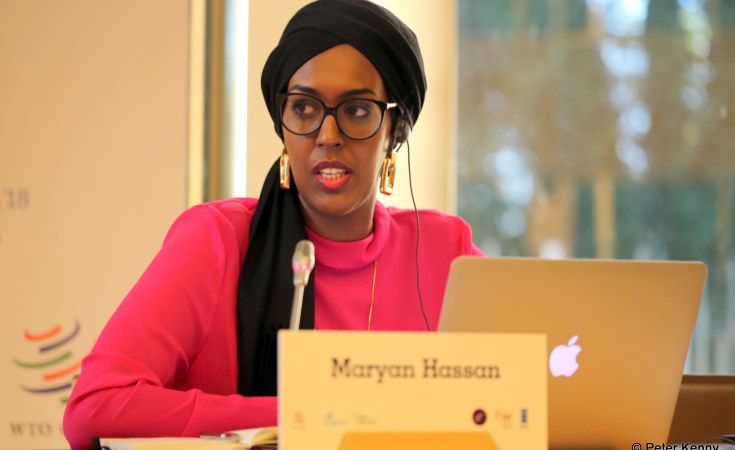 Photo: Peter Kenny
Maryan Hassan, the chief negotiator for the accession of Somalia to the WTO.
allAfrica.com
By Peter Kenny

Geneva — The g7+ grouping of nations – a voluntary association of countries in transition from conflict to development – is not as well-known as the G7 group of leading industrial nations but it has been vigorously promoting how trade can integrate fragile states into the global economy and thus help to establish peace and resilience.

On the last day of the World Trade Organization's annual public forum earlier this month, two African speakers, one from South Sudan and one from Somalia, spoke of the untapped trade and economic potential in nations beset by internal conflict.

The forum was partnered by the WTO-based Enhanced Integrated Framework (EIF), the only multilateral partnership dedicated exclusively to assisting least developed countries (LDCs) in their use of trade as an engine for growth, sustainable development, and poverty reduction.

The EIF is a partnership of 51 countries and its Deputy Executive Director, Annette Ssmuwemba, an economist from Uganda, told AllAfrica that it can help facilitate trade involving neighbors such as South Sudan and her own country.

With its training programs, the EIF can help officials in fragile states wade through the morass of international trade regulations and help facilitate easier trade, advising officials on how to make the exchange of goods easier and less costly.

The keynote speaker at the forum was the g7+ "eminent person", Xanana Gusmão, the founding president of Timor-Leste, a country that won its independence in 2002 after many years of war.

"I am honored to be given the opportunity to address you today on a matter that is impactful on the lives of over 1.5 billion of people, who suffered and are suffering by decades of war and conflicts," said Gusmao. "These countries are sometimes referred to as failed, failing or fragile states in the global discourse and have been the focus of humanitarian, and development organizations assistance, for decades now."

He said the g7+ comprised 20 "so-called 'fragile' states" which the world had left behind as it became increasingly integrated and connected through trade, cooperation and technology. Among African nations which he cited as having the potential for trade to bring about peace were the Democratic Republic of Congo, South Sudan and Somalia.

He added: "South Sudan has vast oil reserves; over 640,000 square miles of arable agricultural land; plenty of water from rainfall (seven to nine months a year) and the River Nile; over 40 million head of cattle; and one of the biggest wildlife migrations that can take your breath away. These huge natural resources can greatly contribute to the global economy.

"As the world economy is becoming deeply interconnected and interdependent through global value chains, we strongly believe that multilateral trade will allow South Sudanese firms to participate in a larger market that offers prospects to economies of scale and productivity gains."

Maryan Hassan, the chief negotiator for the accession of Somalia to the WTO, said that despite what many people think, "Somalia is not at war." With a population of just over 12 million people – of whom 70 percent are under the age of 35 – "there is so much untapped potential and human capital."

Somalia is now in a process of rebranding, she added, and its people, who are "very tech savvy," want capital and to trade.

Seeking entry to the WTO

One of the WTO's deputy directors-general, Alan Wolff, told the forum that many of the 22 countries currently seeking entry into the WTO are conflict-affected countries.

But he cautioned: "Trade does not prevent war. It does not guarantee peace." He added, however: "It does give peace a better chance."

Will Martindale, head of policy and research at the UN-supported group, Principles for Responsible Investment, raised the question of why investors might care about putting money into fragile states.

He said that over the last six decades, GDP growth has been three times higher in peaceful countries than in countries in conflict.

"On average, inflation is three times higher and ten times more volatile in countries ranked towards the bottom of the Global Peace Index than countries at the top," said Martindale.