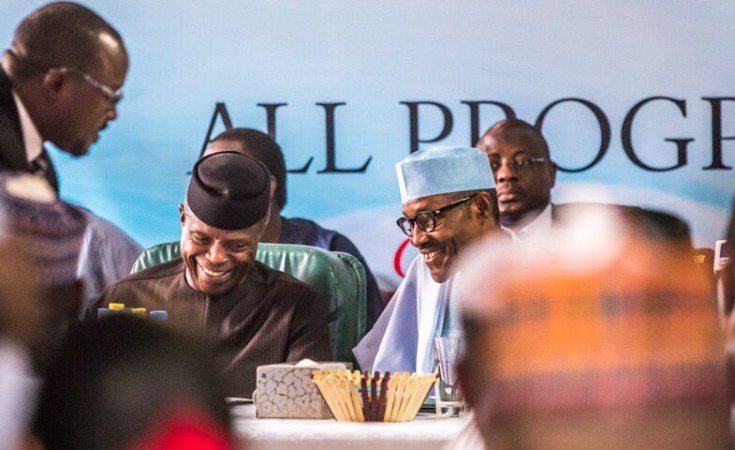 Vice-President Yemi Osinbajo, on Sunday in Abuja, jocularly said he was learning the 'Shaku Shaku' dance steps for campaigns ahead of the 2019 general elections.

The vice president said that his friend recently polled large number of votes just by dancing.

Osinbajo, who was the Chairman and Special Guest of Honour at the 'Launch of Five Fascinating Books' written by Funmilayo Braithwaite, said that his friend recently polled large number of votes just by dancing.

According to him, nobody knows what will work in Nigerian politics.

The books - The Path of Fate, Echoes of Yesteryears, Politicrisis, The Golden Rules and Bonds of Destiny- were unveiled at Transcorp Hilton Hotel.

He said: "And hopefully, we will be able to find resolution to some of questions raised in our political lives as well; I know that is one of the reason Alhaji Shittu Kabir, Chairman, Advanced Peoples Democratic Party (APDA) is here.

"As matter of fact, for those of us who are politicians, when you see 'Politicrisis'; especially as elections approach, you might think there is a formula somewhere.

"Kabir and I are on the opposite sides but we are here to learn; I was saying the other day that politics in Nigeria is becoming very exciting; you never know what works.

"I can never forget my dear friend in one of the states who just danced his way through the campaigns; all he did was dance; he did nothing else but dance and he won 250,000 votes.

"So myself and Kabir are now learning Shaku Shaku; we have to learn; who knows what will win."

Osinbajo lauded the author, adding that looking at what she has done with the five books, it is very evident that a lot of her deep introspection has not left her.

He said that the author was constantly trying to answer the various questions of life.

The vice president said that some of the questions had to do with the value system in the society and how those values might appear to have collapsed over the years.

"When you look at the questions she raised about children; bringing up children bullying and all of that; children even been able to share their thoughts their visions with their parents.

"Going into 'Politicrisis' and all of that; you will find out that the issues are always the same; issues on integrity; how can we stand up for what we believe; competing and very difficult circumstances that we find ourselves.

"And, I am very pleased that despite all the challenges, Funmi continues to be the one doing a lot the thinking for us; a lot of the reflection for us; because society if guided by those who are able to think and reflect; those who are able to sit down and try to answer all these questions for us," he said. (NAN)

How Accurate Is VP's Claim On Nigeria's Debt?

Can Nigeria Dig Its Way Out of U.S.$81 Billion Debt Trap?
Tagged:
Copyright © 2018 Daily Trust. All rights reserved. Distributed by AllAfrica Global Media (allAfrica.com). To contact the copyright holder directly for corrections — or for permission to republish or make other authorized use of this material, click here.