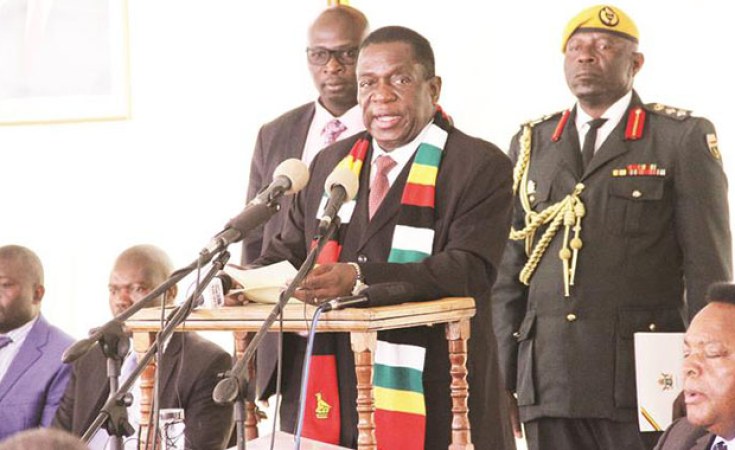 This was after the state leader had invited executives for a crisis meeting at State House in the wake of a government impasse with business over pricing and goods availability.

In just under a month, government has imposed a 2 percent levy on all electronic transfers and downgraded all local bank balances into valueless Zimdollars without any consultation.

Business responded with a hike in prices which was followed by dwindling stocks of commodities in defiance of a government order to maintain original prices and supplies.

The apparent war of attrition has seen income streams diminish way too fast as poor locals source for goods at tripled prices with some in foreign currency.

This has elicited a government scrapping of Statutory Instrument 122/2017, which protected a struggling local industry from cheap imports.

However, in what has been described as an explosive meeting with the country's number one policy maker, businesses said they took Mnangagwa to task over the unilateral imposition of SI 122, ongoing foreign currency shortages and policy discord.

"We reminded Mnangagwa to stop the blame game which points to that business was sabotaging the economy and urged him to admit that lack of adequate support from government through availing finance is causing these problems," said one business leader on condition of anonymity.

"Why would anyone withhold products? There are critical shortages of forex and that is a fact. Instead of addressing the real challenges, the move to suspend Statutory Instrument 122 is cause for concern because this will suffocate industry."

According to the source, business leaders urged the President to apply a condition enshrined under SI 122 which allows the private sector to get first preference to import basic commodities in the event that shortages persist.

Another sticking issue were suggestions by local business to be given leeway to source for foreign currency from the black market, where it is readily available.

"The President was also briefed on the need to amend the laws of the land so that they allow industry to source for foreign currency from the black market which is still deemed illegal under the prevailing regulations," the source added.

The now axed Lumumba's knowledge of the goings-on within inner corridors of the country's apex bank were too startling for someone who has never been a state actor.

On his part, Zimbabwe National Chamber of Commerce chief executive, Christopher Mugaga also confirmed this was also broached during the meeting with the President urged to rein in the discord which has seen government issues being deliberated anyhow.

"The ongoing confusion which has seen the likes of Acie Lumumba taking charge of making announcements on official issues was also raised as there is need to avoid associated confusion. But overally the discussion was fruitful," he said.

The uproar comes just under a week after Oil Expressers Association of Zimbabwe President, Busisa Moyo ripped into government for displaying half-hearted intentions to rebuild the struggling economy as often said by the Zanu PF led administration and its apologists.

"We need to call a spade a spade gentlemen, I have often had government officials talking about Rwanda as an example but let us know that this (Rwanda) nation only achieved its current status after going through a meticulous planning system where they worked collectively to restrategise their economy," he said at a Harare business meeting.

"The economic challenges we are facing today are not insurmountable. My government has developed a comprehensive plan to rescue the economy and the only way to achieve stronger growth is to restructure, rebuild and reform," he said.

He maintained that his administration will cut down on unnecessary expenditure and live within its means urging all stakeholders to work hand in hand with government in implementing structural reforms.

President Tells Depositors Not To Panic