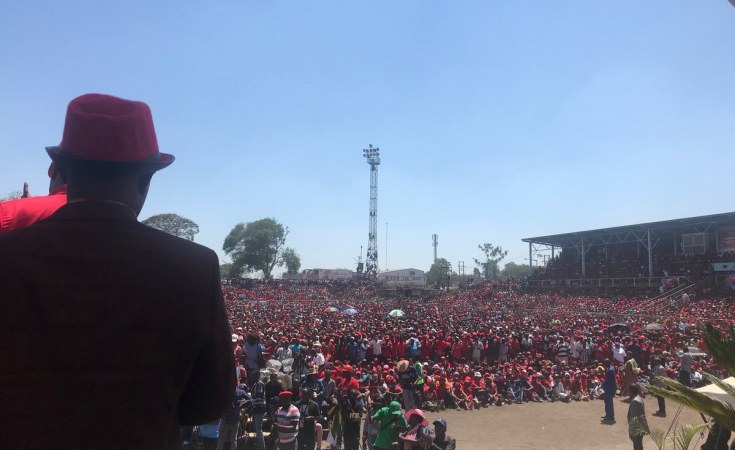 MDC President Nelson Chamisa says he had no wish to work with President Emmerson Mnangagwa but was demanding his right to be the country's leader as per mandate he claims was popularly granted to him by the electorate July 30.

Chamisa, who insists Mnangagwa was an illegitimate state leader, was addressing party followers during the main opposition's 19th anniversary celebrations in Harare on Saturday.

"I told Mnangagwa that for us to reverse the illegitimacy, we have to have political dialogue, not for purposes of having a GNU but to map the way forward," he said.

The MDC anniversary was the first since the death of founding party leader Morgan Tsvangirai February this year.

Before his rally address, Chamisa had demanded the formation of a transitional authority to take care of the country's affairs in the wake of a debilitating economic crisis that is threatening to plunge the country back to the 2008 crisis.

His calls were later dismissed by Mnangagwa who labelled his younger opponent a dreamer.

But Chamisa insisted the Zanu PF leader lacked the goodwill to rule the country adding that the continuation of the status quo will not resolve the country's economic woes.

"That is why we approached SADC and other regional bodies to assist us in this way," he said.

"What we want is that the transitional authority should be made up by us (MDC) as the majority with others being part of us; it should be led by us."

His comments also follow calls by the Zimbabwe Council of Churches for both Zanu PF and MDC to form a GNU so as to ease the current economic crunch being felt across the country.

Mnanagwa however says he was firmly in charge and has promised a quick return to normalcy.

No Need to Panic (Buy) Anymore

Mnangagwa Cuts Off VP Chiwenga's Access to Zimbabwe's Military
Tagged:
Copyright © 2018 New Zimbabwe. All rights reserved. Distributed by AllAfrica Global Media (allAfrica.com). To contact the copyright holder directly for corrections — or for permission to republish or make other authorized use of this material, click here.