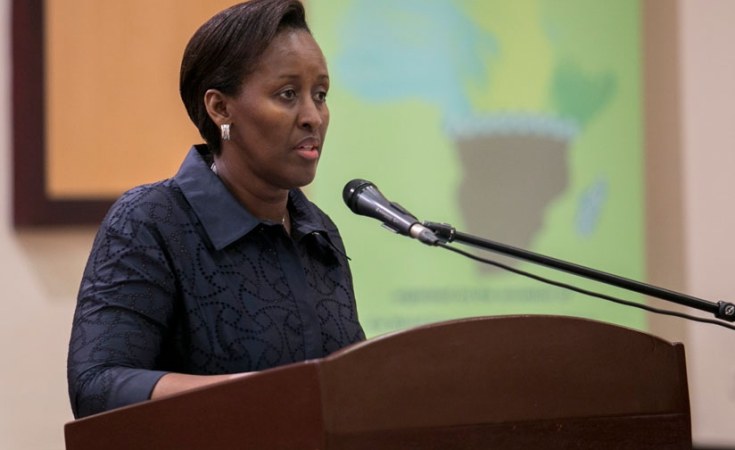 First Lady Jeannette Kagame has said that addressing leadership inequalities, mainly through having more women in leadership positions could be critical in addressing corruption.

Corruption has hostile effects on women and children, which form the biggest percentage of the Africa's population, Mrs Kagame said as she made the case for making women defenders of socio-economic policies.

The First Lady said this yesterday at Parliament where she was officiating at the opening of the 11th Pan-African Parliament Conference on Women's Rights.

"Several studies suggest that women are less corrupt and that companies with a higher number of women in decision-making (positions) perform better in terms of resource management and maintaining a zero-tolerance level for corruption," she said.

She added, "If this is the case, it goes without saying that women's leadership plays a vital role in curbing corruption, and securing our economies."

According to Mrs Kagame, corruption not only discourages investment but also deepens poverty, hurting women the most.

Historical factors such as low levels of education, limited access to job opportunities and unequal pay, she said, were making women more exposed to the effects of corruption.

"Corruption hinders effective service delivery, especially in the areas of health, infrastructure, water and sanitation, education, and other social sectors, which mainly affect women and children," she said.

According the 2012 United Nations Development Programme (UNDP) survey, 76 per cent of the women interviewed had been denied access to public goods and services because of corruption.

"To make matters worse, because of the lure of glamour and short-term gains from corruption, some youth see no incentive to work hard and scrupulously," Mrs Kagame noted.

The First Lady said that Rwanda opted to prioritise the principles of equity and equality, with a view that it would have constructive impacts on mechanisms that reinforce accountability.

She also challenged women parliamentarians to be more pro-active and become social agents of change in overseeing government policies, programmes and budgets allocated to institutions in charge of fighting corruption.

"This should be your goal in order to protect the poor and weak in society, and salvage our economies," Mrs Kagame said.

She added that; "we must demonstrate urgency and resolve to uproot this social evil... by building sound policies and systems that are grounded in a culture of integrity and informed by the principles of ethics and accountability."

Women leaders and decision-makers, the First Lady said, must take on the fight against corruption without fear or favour.

Jamila Ksiksi Debbech, the Chairperson of the PAP Women Caucus, urged the continental parliamentarians to borrow a leaf from Rwanda's achievements in gender equality and fight against graft.

"We all must stand against corruption because it jeopardises the world's transformation and that of our continent," she said.

Miarom Begoto, the Chairperson of the African-Union Advisory Board on Corruption, said that fighting against corruption requires political will.

"Our continent has suffered the most consequences of corruption. We need to work together, efficiently and fast to eliminate this vice," Begoto said.

The African Union marked 2018 as the African anti-corruption year, under the theme; "Winning the Fight against Corruption: A Sustainable Path to Africa's Transformation."

Inspired by Agenda 2063 and other legal frameworks, this event has become an Annual Conference offering a platform to review women's issues in Africa and ensure ongoing monitoring and evaluation of such events. The conference also assesses progress of the Pan-African Parliament in the promotion of gender mainstreaming and the economic advancement of women in Africa and deliberate on gender focused programmes and policies.