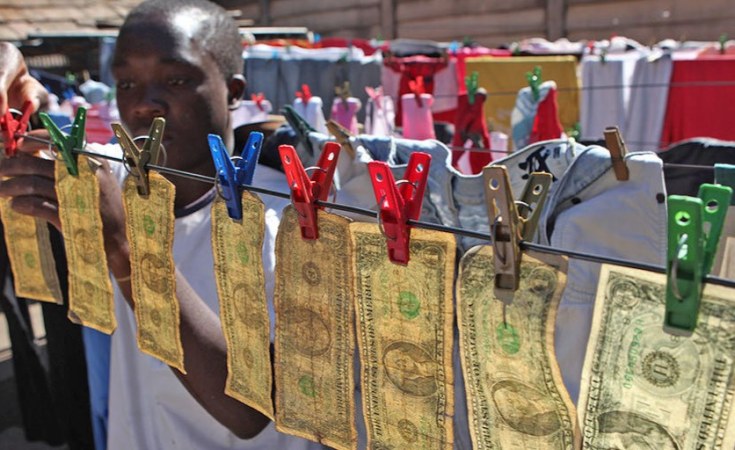 October's economic turmoil in Zimbabwe has again highlighted the precarious state of the country's economy. A casual social media post or imprudent policy statement by a government official is enough to cause panic among Zimbabwean consumers who know from bitter experience that if others are panic-buying, they should do the same. The result is shortages of basic commodities like sugar, cooking oil and bread and, of course, fuel and medication.

At the heart of the problem is government overspending. The profligacy of the Mugabe administration has not changed under President Emmerson Mnangagwa's government. The total budget deficit for the year is expected to surpass US$2.3 billion - quite impressive for a country with a tiny national budget of US$3.8bn.

The deficit is funded by the issuance of government bonds - primarily treasury bills. The problem with these 'IOUs' from government to the banks comes when the bills mature, i.e. become payable, after one or two years.

The government simply doesn't have the money to pay the debts. But a default would render the $8.3bn worth of treasury bills out there almost valueless, destabilise the entire financial system and foreclose the bills as a way of raising money by government.

If CBZ bank can't survive the stress, Zimbabwe's entire financial system will be in jeopardy

Previously, government dealt with the problem by printing money - a temporary escape route that closed when the currency became worthless as a result and the country was forced to dollarise. The 'solution' now is through the simple expedient of directing the Reserve Bank to make book entries into the credit columns of banks holding maturing treasury bills. The credit is not backed by anything other than a second IOU from government to the Reserve Bank.

In this way 'money' is created from thin air. But it never loses its ethereal form. When depositors go to banks and put their cards into ATMs, nothing comes out. The banks advise that the depositors must make do with electronic transfers for all transactions. The transfers are done through the Real Time Gross Settlement (RTGS) clearance process.

Officially the 'RTGS money' is US dollars, on a par at 1:1 with hard cash. The laws of economics say otherwise. With government creating billions of dollars of RTGS money unsupported by anything, its value has declined. Before the October crash, it was trading at 2:1 for hard cash.

Government's refusal to recognise this creates a host of distortions in the economy, most obviously in the supply of fuel. With the petrol price fixed at US$1.41 at the pump and payable electronically, those with hard cash change it on the black market for RTGS deposits and obtain fuel at knockdown prices.

Zimbabwe's market appears to be taking over and re-dollarising, regardless of laws and policy

Transiting truckers from every surrounding country fill up their tanks (and 200-litre drums) in Zimbabwe. Government's fuel bill has soared, contributing to the widening budget deficit and eating up scarce US dollars. This kind of problem is replicated in several other sectors of the economy, from air tickets to import duties.

Zimbabwe's new Finance Minister Mthuli Ncube has recognised the situation as unsustainable. On 1 October he ordered banks to divide depositors' accounts, one reflecting hard cash deposits and one RTGS deposits. The move was rightly interpreted as a first step towards regulated re-dollarisation by allowing the value of RTGS money to float.

The market reacted instantly. The black market value of RTGS money plummeted to 5:1. With many manufacturers and retailers compelled to buy imported inputs and goods with real dollars sourced on the black market, prices skyrocketed.

Consumers rushed to buy products still marked at old prices or before the rate declined further. Panic buying set in and consumers hoarded or bought goods for resale on the black market. After several days of consumer chaos, the black market rate for RTGS money began to fluctuate wildly.

Government's fuel bill has soared, contributing to the budget deficit and eating up scarce US dollars

Unsure of how to price goods, several retailers closed their doors, hoping the economy would stabilise. Some adopted 'tier pricing', offering differing prices for goods depending on the mode of payment. Others demand hard cash.

Although pricing in US dollars is technically illegal, despite some desultory threats, government has so far taken no action against offenders. Government doctors and teachers have also demanded that their salaries be paid in real money. Others will follow. It thus appears that the market is taking over and re-dollarising, regardless of laws and government policy.

If RTGS deposits return to the ether whence they came, many will lose significant amounts of money. Zimbabwe's largest bank by asset base is CBZ Limited. More than 50% of that asset base comprises treasury bills and other government bonds, which may become virtually worthless through re-dollarisation. If CBZ can't survive the stress, Zimbabwe's entire financial system will be in jeopardy.

Mnangagwa has always known that he is in a race to engender some sort of recovery before the economy reaches the edge and falls into an irreversible downward spiral. The events of October suggest he is losing.

Recovery can only come with foreign investment in Zimbabwean commerce and industry. But what investor would want to bring hard currency onshore, to see its value immediately reduced as it is turned into RTGS money, where profits are generated in RTGS money and offshore shareholders cannot be paid?

So the logjam continues. The currency problem cannot be solved without investment, and investment won't come until the currency problem is solved and certainly not while Zimbabwe has shown itself prone to bouts of extreme economic chaos and potential social unrest. And while government scratches its collective head, Zimbabwe's economy inches ever closer to the brink.