Africa: A Call to Action for Africa's Biodiversity Crisis 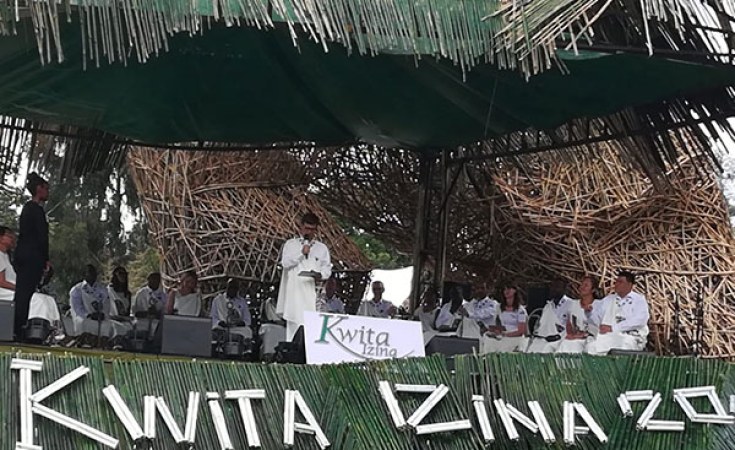 Photo: Susan Muumbi/Nation Media Group
The naming of a mountain gorilla in Kinigi, at the foothills of the Volcanoes National Park on September 7, 2018.
allAfrica.com
guest column By Olusegun Obasanjo

Former President of Nigeria, Olusegun Obasanjo, has called on his fellow African leaders to take action to tackle the current biodiversity crisis facing the continent and do more to protect Africa's natural resources. This comes in light of the Living Planet Index's release last week, which showed that species have declined by 60 percent on average. As a continent that relies so heavily on biodiversity for food, water, jobs and cultural heritage the President has urged African policy makers to take action when they meet at the African Biodiversity Summit later this month.

05 November 2019 - A Call to Action for Africa's Biodiversity Crisis

Earlier this year I had the great privilege of travelling to Rwanda to take part in the unique Kwita Izina ceremony. This ceremony celebrates Rwanda's treasured gorilla population by inviting friends to come and name the years' new-born babies.

Being in Rwanda gave me an opportunity to reflect upon my own home's wildlife. Nigeria, although not usually thought of as a destination for wildlife, is in fact rich in biodiversity. But our flora and fauna has been put under immense pressure over the past few decades and the cracks are starting to show.

Take Old Oyo National Park, near my home state Ogun, it used to be a home for the rare wild dogs, but now they have all but disappeared due to hunting and human encroachment. In the Northeast of Nigeria, we have a similar story, the elephant – synonymous with African majesty – now exists only in small endangered populations. Lastly the mandrill, Nigeria's closest relative to the gorilla and the world's largest monkey, finds itself increasingly threatened in the South East.

This story is repeated the continent over. Once bursting with biodiversity, increasingly Africa's wildlife populations are relegated to smaller and smaller corners of the continent. It is for this reason I was so honoured to take part in Kwita Izina, a ceremony that serves as an antidote to years of reckless environmental management, and it is for this same reason that I write to you, my fellow African leaders to ask that you take heed to the major crisis our planet faces due to the loss of nature.

The more I consider the wildlife we have lost not just in Nigeria but across Africa I realise that safeguarding our natural resources is not just about helping plants and animals, but about preserving our communities, our water supplies, food supplies and cultures. We simply cannot afford to sit by and do nothing.

Of course, there is not just a problem in Africa. Nature is in a state of crisis around the world. The current rate of global species loss is 1,000 times higher than the naturally occurring rate, and the destruction of nature continues at a pace that far exceeds the new protection of important land and marine areas.

It will require global action to confront this escalating crisis, and I believe that Africa should lead the world in developing a solution. There are several treaties - including the Convention on Biological Diversity - that give African nations the opportunity to demonstrate this leadership and help bring the global community together around new, more ambitious goals to protect and responsibly manage the world's lands and oceans.

We can do this important work in a sustainable way, mindful of our ever-growing populations and their needs.
We must give nature the space it needs to heal itself and our countries will surely reap the benefits, whether it be through food, water, natural beauty or the employment opportunities that come with a strong tourism industry.

President Olusegun Obasanjo is Chairman of the Brenthurst Foundation and was a guest of honour at this years' Kwita Izina ceremony in Rwanda. At the ceremony, which took place on September 7th in Kinigi, Musanze district in Northern Rwanda, Obasanjo, whose full names are Chief Olusegun Mathew Okikiola Aremu Obasanjo, named a baby gorilla his middle name; 'Aremu' – meaning every child is useful within the family.

The Living Planet index was released by the World Wildlife Fund for Nature and serves as a biannual report that examines trends in the global Living Planet Index, a biologist's "stock market index" for the diversity and abundance of animals worldwide.