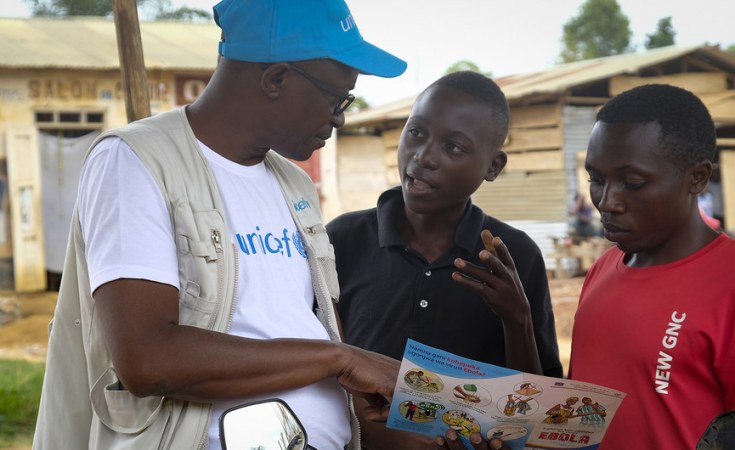 Thomas Nybo/UNICEF
A UNICEF staff member discusses the best way to protect yourself against Ebola in a September 12, 2018 conversation with young people living in Beni, Democratic Republic of Congo, after a recent Ebola outbreak.
UN News Service

The World Health Organization (WHO), and Ugandan Ministry of Health, have begun vaccinating frontline health workers in the country against Ebola, in a bid to stop an outbreak in the neighbouring Democratic of Congo (DRC) from crossing the border.

The exercise, which began on Tuesday, is centred around five high-risk districts of Uganda that border the DRC (Bundibugyo, Kabarole, Kasese, Ntoroko and Bunyangabu) and involves the administering of 2,100 doses of vaccine to health workers, protecting them against the particular strain of Ebola currently circulating in some parts of DRC.

No cases of Ebola have so far been reported in Uganda, but the authorities are implementing the plan in order to avoid the fatal consequences of previous outbreaks, which saw health workers contract the disease and die as they cared for patients.

WHO said in a statement released on Wednesday that it is "highly likely" that Ugandans in districts near the border will be infected with the virus, due to their close proximity to the epicentre of the outbreak, and high population movements due to trade, social and cultural connections and the relatively easy access to health services.

Dr Yonas Tegegn Woldemariam, WHO Representative in Uganda, referred to the vaccination as a huge step in mitigating the risk of Ebola among health care workers, and assured them that it would provide effective protection.

The deteriorating security situation in the DRC has complicated efforts to get the Ebola outbreak under control: across the country, local populations and humanitarian workers assisting them have come under attacks by armed groups, necessitating the deployment of a large UN peacekeeping mission.

A WHO assessment of the situation in DRC released on 22 October, warned of the potential for the virus to spread into Rwanda, South Sudan and Burundi, as well as Uganda, and called on these countries to step up readiness efforts.

Other preparatory activities underway in Uganda to prevent the spread of the disease include health facility and community-based surveillance; collection and testing of blood samples; and cross-border monitoring.

Ebola in DR Congo Remains Dangerous, Unpredictable - UN
Tagged:
Copyright © 2018 UN News Service. All rights reserved. Distributed by AllAfrica Global Media (allAfrica.com). To contact the copyright holder directly for corrections — or for permission to republish or make other authorized use of this material, click here.