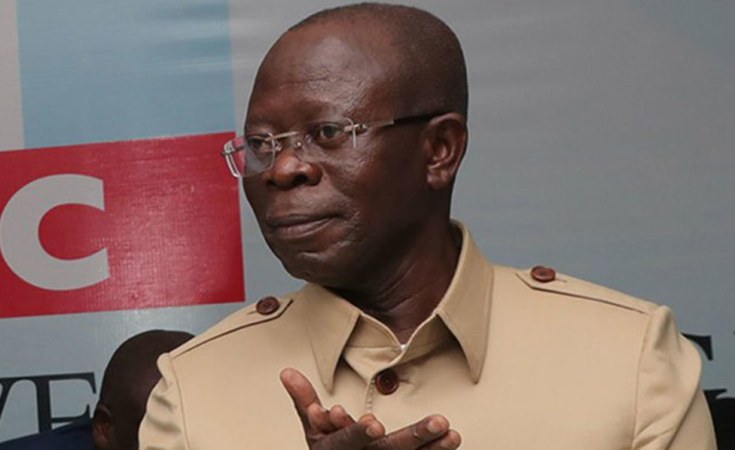 Amosun met with President Muhammadu Buhari in the State House behind closed doors.

Amosun and his Imo State counterpart, Rochas Okorocha, have engaged Oshiomhole in a battle for supremacy over the latter's decision to deny their anointed candidates tickets for the 2019 general election.

After the meeting, Amosun was asked by State House correspondents if he had a hand in Oshiomhole's current ordeal with the DSS.

Responding, he said by the question, he was being conferred with oversight power over the embattled national chairman which he said was not within his jurisdiction.

According to him, if there is any need for him to fight, he goes all out to slug it out with the person concerned without having to hand his battle to anyone.

He said, "I think you are probably giving me an oversight role and I am not a security person, so clearly I think that question will not be for me.

"I don't have to hide under a finger to fight. If there is need for me to put my views across, you know me by now that I will do it.

Asked for his reaction to the report that Oshiomhole might have fled the country following his encounter with Department of State Services (DSS) at the weekend, Amosun said, "I have told you those things are beyond my pedigree and you are asking me questions that I am not well suited for. The one that I think I should talk about we have said it loud and clear that we don't need to add any other thing." Asked again on the reason for his visit to the State House, he said, "I always come like this and I know that you will want to ask me this and that and that is what you are doing, but clearly and talking seriously, I think that all that needs to be said.

"I think all of you can attest to that, that has been said loud and clear and I think saying anything further would amount to probably sounding like a broken gramophone. I think I have said all that we need to say and we did it loud and clear."

In strict compliance with the directive of the Edo State Governor, Mr. Godwin Obaseki, on respect for law and order, the state government has arrested one Peter Okpame, a member of an illegal revenue collection syndicate operating in Koko-Oghara-Sapele-Warri park along Sapele Road in Benin City.

The arrest followed a petition to Obaseki and the Edo State Internal Revenue Service over the operations of the syndicate in the area.

Senior Special Assistant to the Governor on Security and Surveillance, Emmanuel Orukpe, in a chat with journalists, said the action was taken to curb the activities of miscreants and others, who swindle unsuspecting residents in the pretext that they are agents of government.

According to him, "After investigating the allegation contained in the petition written by a concerned citizen, who operates as a driver at the park, the order for the arrest of members of the syndicate was issued by the state government to the State Command of the Nigeria Police.

"During surveillance by members of my team working with security intelligence operatives, Peter Okpame, who is a member of the syndicate, was arrested. As I speak to you, Okpame is being interrogated by the Police."

Orukpe added, "We are hoping to get more details of the operations of the syndicate and identify other members of the group involved in the illegal revenue collection. They are on the run, but we assure that we will apprehend them."

He said that the state government will not hesitate to prosecute any person or groups found to be collecting illegal revenues in whatever form or guise, warning those still involved in the illegality to desist from it forthwith.

Speaking to journalists after his arrest, Okpame said members of his group collect N200 each from commercial drivers daily at the Koko-Oghara-Sapele-Warri park, which is remitted to their leaders.

"The N200 we collect from each driver daily is used for maintaining the park which is in bad condition. We get at least N10,000 daily and give same to our leaders."

Okpame, who claimed to be a member of the State Chapter of National Union of Road Transport Workers (NURTW), said he was aware of the state government's ban on illegal collection of revenues.

Oshiomhole vs Saraki - No Seeing Eye to Eye Here, Thank You!
Tagged:
Copyright © 2018 This Day. All rights reserved. Distributed by AllAfrica Global Media (allAfrica.com). To contact the copyright holder directly for corrections — or for permission to republish or make other authorized use of this material, click here.