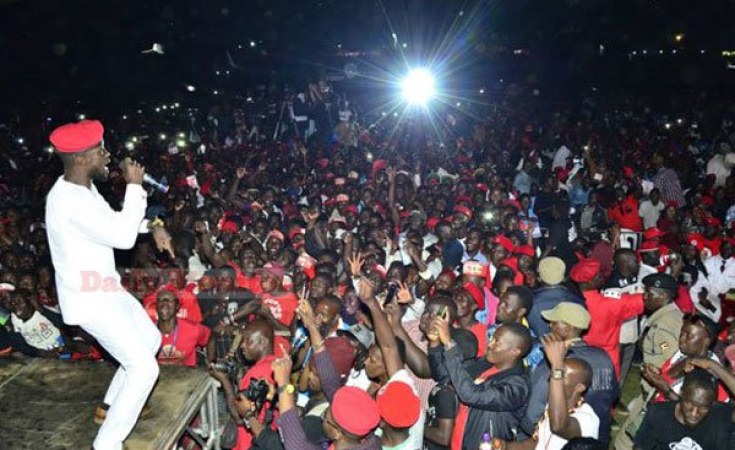 Micheal Kakumirizi/ The East African
Uganda's musician and lawmaker Bobi Wine on stage at his Kyarenga concert on November 10, 2018. Police arrested more than 80 suspects from the concert (file photo).
The Monitor (Kampala)
By Joseph Kato

Police in Uganda have arrested more than 80 suspects from Bobi Wines’ Kyarenga concert, which was held at One Love beach in Busabala on Saturday.

The suspects, reportedly detained at Kabalagala and Katwe police divisions, were apprehended on accusations of engaging in offences such as pickpocketing, drug smoking, fighting and being a public nuisance.

The Kampala Metropolitan police spokesperson, Mr Luke Owoyesigyire, said the security agents would screen the suspects but applauded revellers for being peaceful and respecting the day’s security plan.

Prior to the concert, police had issued strict security guidelines for those intending to attend the concert which was estimated to attract more than 50,000 people.

Meanwhile, unconfirmed reports indicated that 43 motorcycles and seven cars were impounded for abusing traffic regulations on the Entebbe highway while going or returning from the Kyarenga concert.
The Kyadondo East MP, Mr Robert Kyagulanyi, popularly known as Bobi Wine, urged the youth to prepare for the 2021 General Election in advance.

Bobi Wine said the youth should register in time to get their national IDs to qualify as voters.

He said it would make no sense for the youth to cheer politicians when they were not eligible voters.

Uganda Police Arrest Bobi Wine, Fire Teargas at Supporters
Tagged:
Copyright © 2018 The Monitor. All rights reserved. Distributed by AllAfrica Global Media (allAfrica.com). To contact the copyright holder directly for corrections — or for permission to republish or make other authorized use of this material, click here.