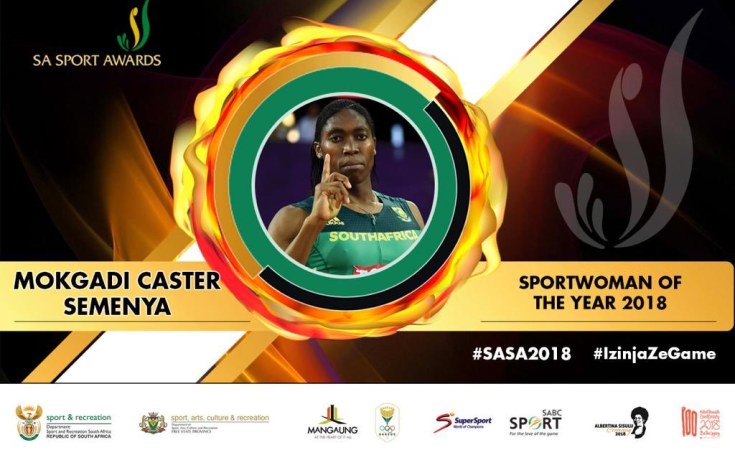 The record-breaking athlete dominated the prestigious awards after winning the Sports Star of the Year' Sportswoman of the Year and the People's Choice Award decided by public, all of which were accepted by her coach Samuel Sepeng, who also received the Coach of the Year award.

The other major winner of the night was Olympic swim sensation Chad le Clos who was named the Sportsman of the Year, where he was nominated alongside WBA and Ring Magazine light-flyweight champion Hekkie Butler and Manyonga.

Commonwealth Games 100 and 200m breaststroke champion Tatjana Schoenmaker was named the Newcomer of the Year where she was nominated with fellow swimmer Minke Janse van Rensburg and sprinter Luxolo Adam.

The fearless and passionate Virginia Mabaso from Rowing SA continued to break all boundaries in sport and was named the Administrator of the Year, while the National Federation of the Year was taken by Softball.

The SA Sports Awards aim to reward South African sports stars who participate in local and international competitions. They also recognise and honour individuals and teams who have excelled both on and off the field from 1 September 2017 until August 2018.

Sportswoman of the Year: Caster Semenya

Sportsman of the year with Disability: Mdodozi Ntutu

Sportswoman of the year with a Disability: Anrune Liebenberg

Team of the Year: Banyana Banyana

Newcomer of the Year: Tatjana Schoenmaker

Coach of the Year: Samuel Sepeng

Volunteer of the Year: Linda Hlophe

The Recreation body of the Year: Mavu Sport Development

National Federation of the Year: Softball

Caster Semenya Takes On World Athletics Body
Tagged:
Copyright © 2018 South African Sports Confederation and Olympic Committee. All rights reserved. Distributed by AllAfrica Global Media (allAfrica.com). To contact the copyright holder directly for corrections — or for permission to republish or make other authorized use of this material, click here.