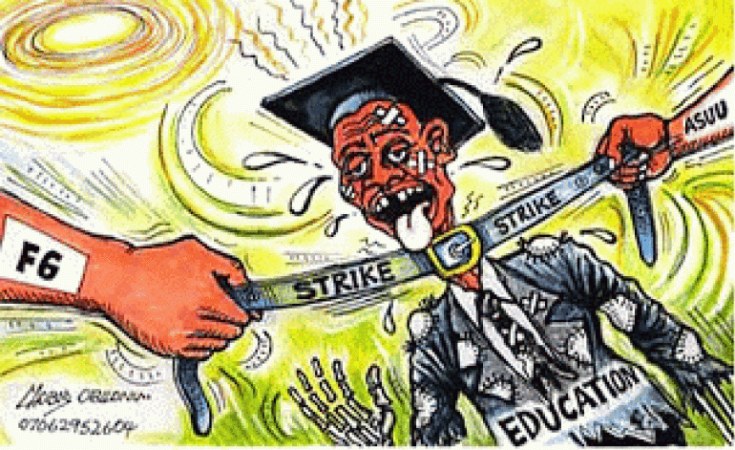 The Academic Staff Union of Universities (ASUU), says it is ready to negotiate with government toward ending its one-week old industrial action.

Its President, Prof. Biodun Ogunyemi, who was guest on TVC News Breakfast show on Tuesday, also advised government to establish an education bank for proper funding of universities.

He regretted the attitude of government to the university lecturers' demands, saying that letters notifying government of the strike, which were submitted to the education and labour ministries on Nov. 5, had not been replied.

"The ministries signed to acknowledge receipt of the copies we gave them, but none has written a reply to us," he said.

He accused the political class of strangling primary and secondary education in Nigeria, saying that 24 states had failed to access the Universal Basic Education Commission funds for 2018.

According to him, that has left UBEC with more than N60 billion that states have yet to access.

Ogunyemi observed that the federal government, which had consistently allocated seven per cent to education in the last two years, was not sincere in the claim that it was declaring a state of emergency in the education sector.

"The Federal Government suddenly woke up from slumber and announced a state of emergency in the education sector. It also promised to allocate 15 per cent of its budget to the sector. We find this unbelievable and deceitful.

Buhari to Diaspora Nigerians: You won't vote in 2019

"We feel that the 'sudden' promise has more to do with the fact that we are in an election year," he declared.

He alleged that the ruling class in Nigeria had no concern for the education of the poor.

Newsmen report that the lecturers had resolved to remain at home until their demands, which include proper funding of the universities, are met.

Other demands included the payment of full salaries by state-owned universities, payment of earned academic allowances, among others.

Nigerian Govt, Academic Union Meeting Ends in Deadlock
Tagged:
Copyright © 2018 Vanguard. All rights reserved. Distributed by AllAfrica Global Media (allAfrica.com). To contact the copyright holder directly for corrections — or for permission to republish or make other authorized use of this material, click here.