The Senate has expressed concern over alleged huge reduction, by the federal government, of the refund the Central Bank of Nigeria (CBN) asked telecoms giant, MTN, to make, from $8.1 billion to $800 million.

But in a swift reaction last night, the CBN Director, Corporate Communications, CBN, Mr. Isaac Okorafor, denied the alleged reduction of the refund.

"There is no such thing. I have no such knowledge," he told THISDAY.

The refund had been imposed on the telecoms for currency regulations infraction.

While the telecoms denied any wrongdoing and approached the court for redress, the CBN held out an olive branch, saying it was open to negotiating the refund figure downward.

In fact, the CBN Governor, Mr. Godwin Emefiele, had in October hinted in London of plans by government to slash the $8.1 billion refund MTN was to make, but did not disclose the amount it was intended to be reduced to.

THISDAY reported exclusively last Friday that the MTN Group CEO and President, Mr. Rob Shuter, was in Abuja last Thursday and met with the Emefiele to discuss the refund, adding that based on unassailable findings, there was an agreement that the CBN would grant the telecoms a substantial reduction.

Although the outcome of the meeting and the size of the reduction have not been made public by the apex bank, the Senate kicked yesterday, alleging that a whopping $7.3billion had been discounted without recourse to it.

It has, therefore, mandated its Committee on Banking, Insurance and other Financial Institutions, headed by Senator Rafiu Ibrahim, to probe the alleged reduction by the federal government through the CBN.

According to Ibrahim, Emefiele had in October hinted in London of plans by government to slash the $8.1 billion figure to $800 million.

The senator noted yesterday in a telephone interview with National Assembly correspondents that though the Senate was not particularly against whatever the government would want to do with the MTN refund, it should be informed why the reduction became necessary.

He said, "We're not against whatever they're doing, but they will have to explain to Nigerians. Did they take the decision they took against MTN in a hurry, a foreign direct investor like MTN?"

Ibrahim said his committee would immediately demand for CBN report on the matter to be better informed.

According to him, the only way Nigerians would know what transpired between the CBN and MTN on the $8.1 billion refund was through a detailed report.

Ibrahim said, "The last time we heard about this issue was when we had a retreat two weeks ago in Lagos, where they (CBN) did the presentation of their biannual activities to the Senate Committee.

"We took them up on the issue, and the bank, that's the CBN told us how they did the investigation. We're taking them up based on the fact that we have investigated and we saw what happened."

He added that Senate resolutions were passed to the CBN, complaining that the apex bank did not implement them before going into another investigation.

According to him, "What CBN told the committee that day was that they were going to give us the report from when they started the investigation to date and their discussion with MTN.

"So, if that's the case, they have to answer to Nigerians through us in the Senate committee to the legislature, what informed the penalty of $8.1bn? And what information have they now gathered that informed the reduction to $800m. I don't know what percentage of reduction you can call that. Is it not up to 1,000?

"We took into consideration the role of MTN in the economy. That's why we did a very thorough job, and we believe we did a thorough job, that they did not steal any money then, that was our own assertion, though they repatriated. So, we will be interested in the investigation."

Asked if the committee may likely pursue the matter further, Ibrahim said, "Definitely, I will call the Clerk to ask the CBN that we are expecting their report as promised at the retreat.

"In the report, if we find anything close to this, I will let you know. We will write them and probably give ultimatum for the report. This is a very sensitive thing to the economy.

"All of us know they (MTN) committed a lot of resources in Nigeria; so we don't want them to be used as a yardstick as to how the Nigerian government treats investors."

The Senate adopted a report last year largely exonerating MTN of alleged illegal repatriation of $14 billion out of the country.

It also asked the CBN then to sanction Stanbic IBTC Bank "for improper documentations in respect of capital repatriation and loan repayments" on behalf of MTN.

This followed the consideration of the report of its committee on Banking, Insurance and other Financial Institutions, which investigated alleged unlawful repatriation of $14 billion from Nigeria.

Emefiele was quoted to have said during a visit to London, "I don't think the MTN fine will be staying at $8.1bn," adding that he expected the issue to be dealt with amicably and equitably.

"I want to believe that the figure will reduce. Whether it will be dropped completely, I honestly cannot say at this time," the CBN governor added. 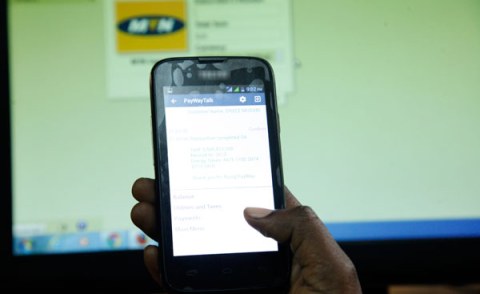 MTN Nigeria Moves to Mobile Banking in 2019
Tagged:
Copyright © 2018 This Day. All rights reserved. Distributed by AllAfrica Global Media (allAfrica.com). To contact the copyright holder directly for corrections — or for permission to republish or make other authorized use of this material, click here.