South Africa: Mashaba Apologises for 'Ebolas' Remark but Not for Protecting Residents 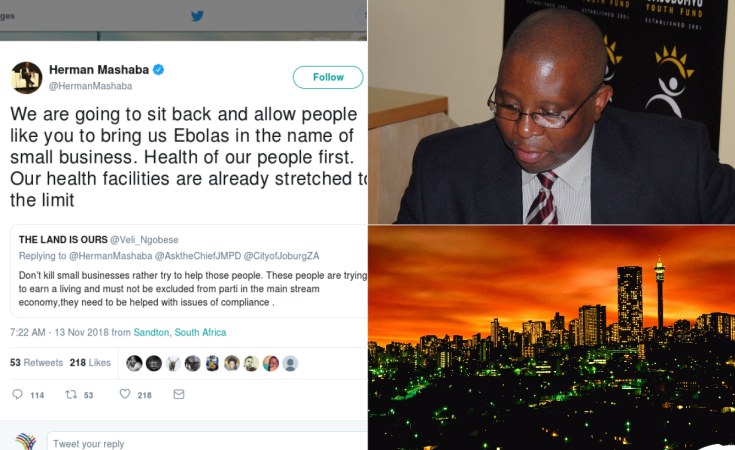 Johannesburg Mayor Herman Mashaba has apologised for the "ebolas" comment he made on social media earlier this week when he arrested an informal trader selling cow heads.

In the post, he accused the trader of bringing potential diseases, such as ebola, to residents.

"I apologise most sincerely to our residents for my comments relating to the meat also presenting a potential risk of an ebola outbreak. I also apologise for what has appeared to be insensitivity towards the plight of informal traders in our city, attempting to earn a living," Mashaba said in a statement on Wednesday.

Mashaba's apology comes after the comment sparked public outrage on social media and some people perceived it to be xenophobic.

In the tweet on Monday, he said he had made his first citizen's arrest, after a man was nabbed for pushing a trolley of about 20 cow heads through central Johannesburg, News 24 reported earlier.

But Mashaba said in his statement that the comments were not an attack on any person, group, informal traders nor foreign residents.

He added that his response was merely born out of the reality that so many residents who do not have access to quality healthcare in the city were vulnerable to outbreaks that could arise from the improper treatment of food.

"I am not above making a mistake, and when I err, I am willing to humble myself and apologise unreservedly to our residents," Mashaba said.

Health inspectors to assist informal traders in the inner city

The mayor has since taken advice given on social media and intends to bring a team of health inspectors to assist informal traders in the inner city to comply.

"I have asked that our team of health inspectors are on the ground in the inner city work with informal and formal traders to understand the safety standards of the City and why they are so important," he explained.

Mashaba however, remains unapologetic about his commitment to protecting residents.

"For my commitment and focus on the enforcement of by-laws in our City and the need to proactively protect the well-being of our residents, I remain resolute and unapologetic.

"As a City we have to be proactive in preventing breakouts of disease, knowing how the poorest in our city are the most vulnerable in this regard," he concluded.