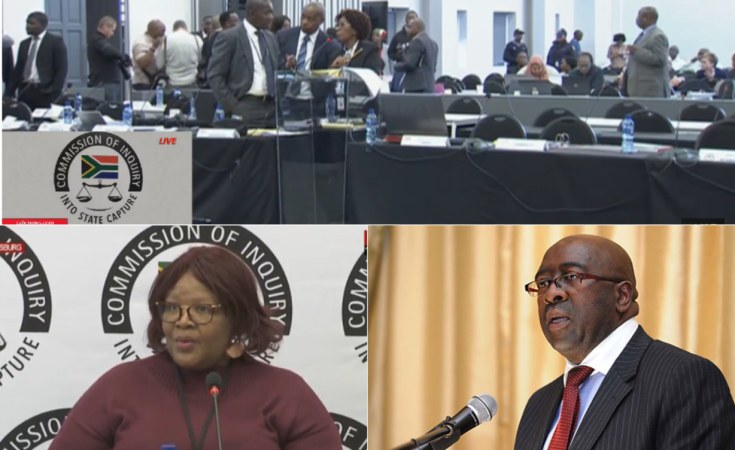 Gigaba's resignation on Tuesday came a month after that of the finance minister Nhlanhla Nene - and for more or less the same reason. The two men are suspected of acting in favor of the Guptas, the wealthy Indian business family at the center of South Africa's biggest post-apartheid corruption scandal that led to the fall of the Jacob Zuma presidency in February.

A storm of allegations has swirled around Gigaba since he held the posts of finance minister and public enterprises minister under Zuma. He is suspected of having fast-tracked the citizen applications of the Gupta brothers and relatives, clearing the way for them to run businesses and tender for government contracts worth millions of dollars in South Africa.

Inquiry into the allegations of state capture bega in the wake of Zuma's resignation. Testimony before it in recent months has started to shed light on the extent of the corruption involving African National Congress (ANC) lawmakers and their associates with access to state enterprises.

Nene was forced to resign after he admitted in testimony that he had lied when he previously denied having met with the Guptas. The former finance minister's son is alleged to have gained financially in a deal involving a public financial services company.

Gigaba said his resignation was not an admission of guilt but was intended to protect the integrity of the ANC and the government, which is now led by President Cyril Ramaphosa. ANC spokesman Pule Mabe said the party salutes Gigaba.

"I think he deserves some bit of recognition from all of us because he took this decision himself and out of his own accord," Mabe said.

The Economic Freedom Fighters (EFF), arguably the most combative of the ANC's opponents in parliament, hailed his departure. "Malusi Gigaba had been a Gupta stooge who was the engine of state capture under Jacob Zuma," EFF spokesman Mbuyiseni Ndlozi said.

The main opposition Democratic Alliance (DA) took things a step further, noting on Tuesday it had laid criminal charges of perjury against Gigaba. DA leader Mmusi Maimane said he had caused "profound damage to state owned enterprises" and called his resignation "the right step in eradicating the system of corruption."

Like Zuma, Ramaphosa -- a former prominent anti-apartheid activist and trade union leader who became a billionaire businessman -- is part of the ANC ruling elite. Ramaphosa replaced Zuma as president after he won the party leadership by a small margin over Zuma's ex-wife. The ANC leader usually becomes president.

Ramaphosa has promised to root out corruption. The Commission of Inquiry into Allegations of State Capture is expected to ultimately lead to criminal charges. Even South Africans who have lost confidence in the ANC are hopeful he can turn things around for the country.

In the two weeks leading to the latest high-profile government resignation, the nation's attention had shifted from the ex-finance minister to Gigaba for two unrelated reasons. The office of the Public Protector ruled that he had violated his oath of office by lying in court about granting permission to the wealthy Oppenheimer mining family to operate a private terminal at the main airport in Johannesburg.

At the same time, a video of Gigaba in a compromising sexual position was being circulated on social media. Gigaba's claim that the clip was intended for his wife and was leaked after his smartphone was hacked earned him little sympathy. The public protector uged Ramaphosa to take disciplinary action against Gigaba over the airport affair and the DA turned to the courts.

Thuso Khumalo contributed to this report.

What Gordhan Said at South Africa's State Capture Inquiry
Tagged:
Copyright © 2018 Deutsche Welle. All rights reserved. Distributed by AllAfrica Global Media (allAfrica.com). To contact the copyright holder directly for corrections — or for permission to republish or make other authorized use of this material, click here.