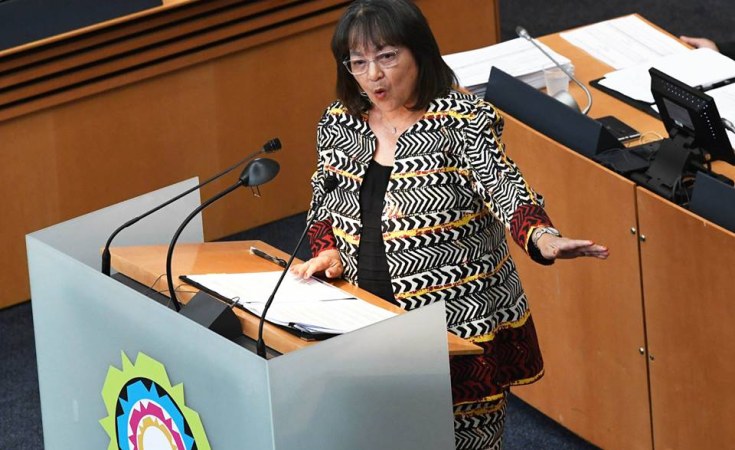 Patricia de Lille will continue her lifelong fight for a just, fair and caring society by forming an as yet unnamed political party, the former mayor of Cape Town announced on Sunday.

Bringing speculation about her future ever since she resigned as mayor and DA member on October 31 on end, she said the new party's name and policy positions will be announced in two weeks, while it will be officially launched in January next year before it contests the elections in every province.

"I've spent my entire life fighting for a society that is just, fair and caring and will not rest until that is achieved," she said.

"Today, I'm inviting all South Africans who are in search of something new that will disrupt our current political system to join me.

"When good people do nothing, evil prospers," she said.

De Lille's resignation as mayor was the culmination of 18 months of acrimony between her and the DA - that party she joined when it merged with the ID, which she founded and led, in 2010. She was accused of turning a blind eye to corruption and poor management, and she said a "cabal" went after her when she started to address apartheid's spatial planning.

De Lille spent some time in her speech on Sunday in the Sun Square Hotel in the Cape Town city bowl speaking about what she called her "abusive relationship" with the DA, but insists she is not bitter. She did however, say if anybody has a go at her, she will have a go at them too.

"It became clear that the project Helen Zille [former DA leader, current Western Cape leader] and I agreed on in 2010, to create a viable alternative to the ANC, was no longer underpinned by the values I believed in and on which the DA campaigned," she said.

"That said, one of the lessons Tata Madiba taught me after his 27 years of incarceration is that if he can forgive his oppressors, I can also forgive my oppressors. I say: 'God, forgive the fools, they know not what they are doing'."

De Lille said over the past two weeks since her resignation she has not only spent time with friends, family, her dogs and tinkered around the house, she has also consulted about her continuance in politics, including a survey - "which confirms support" - by market research firm Ipsos.

"I have listened to the thousands of people who have reached out to me directly," she said.

"I have considered close to thousands of thousands of requests, from people across our city to continue to serve our country and to start a new political movement."

"I also received a signal from Mamma."

"The things I believe in and have fought for my entire life, remain my guide. My values remain steadfast."

She said "politics as usual" failed too many South Africans, who have lost faith in politics and politicians.

"God-forbid they should lose faith in our democracy because the people in politics have not lived up to the privilege and responsibility to serve."

"It is time for a new political order."

The 67-year-old political veteran said she is still fit, healthy and "motivated by the same level of outrage at the state of our country as I was 50 years ago when I was outraged by the cruelty and illegality of apartheid".

De Lille confirmed that she was approached by other parties, including the ANC and EFF, but she believes that the "old template and style of politics" needs to be changed.

De Lille laughed when she was asked if she will compete for the Western Cape premiership. She said an announcement on these matters will be made at the party launch in January.

De Lille said she has thus far financed the party herself, as an "investment in the country".

"I'm not doing this for money," she said. "I could sit comfortably at home and earn my pension."

She said she wants to leave behind a legacy.

"There are over 500 political parties in South Africa, Ms De Lille's one will form part of that group. The real test for any organisation will be at the polls on election day.

"Ms De Lille's latest political move is consistent with her brand over the years. She has, whenever it has been politically expedient, moved from one political movement to another. Ms De Lille was at odds with the DA because she refused to be held accountable when revelations of her covering up corruption came to the fore. She must now account for the criminal and corruption charges she faces," Malatsi's statement reads.

"In the meantime, the DA will focus on our own campaign which we are engaging South Africans across the country about. We are committed to building One

South Africa for all and we will not be distracted."

What will Patricia de Lille's unnamed new party be about?

While De Lille's party's policy positions are still to be announced, she described the party's values as follows:"Our party will put people before politics. We will be on the ground - not just sitting in parliament.

"Our party will build a better country for the next generations."We will look after families and educate to liberate.

"We will be a party of action. Less talk and more action.

"We will clean up our country and politics.

"We will make change happen for the greater good.

"My exposure to, and my being the target of, pure hatred tested my beliefs. I am happy to say that I still believe in good. I believe in a good South Africa. Where every child will be born in a good hospital where good doctors provide good healthcare. Their home will be a good house in a good community where there's a good school. They'll get a good education, a good foundation, with good values, to live and learn and play and grow and know what it means to be good.

"In a good South Africa, there will be good opportunities to get a good job that offers good reward for good work. To live a good life, and share, live and care and know what it means to be good.

"In a good South Africa, we will fight corruption and stand up against racism by doing what is good because we will know what it means to be good.

"Racial division, prejudice and inequality continue to exist in our society. My great fear is that our next generation of young South Africans will carry forward with them, the tensions that exist between different races in our country. We will not allow racists to speak for us."

Former Cape Town Mayor De Lille Launches Good
Tagged:
Copyright © 2018 News24Wire. All rights reserved. Distributed by AllAfrica Global Media (allAfrica.com). To contact the copyright holder directly for corrections — or for permission to republish or make other authorized use of this material, click here.