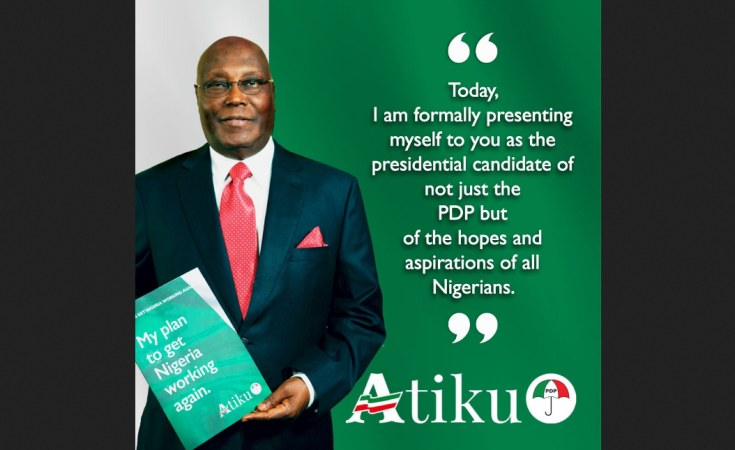 A live Facebook event has been planned for the commencement of Atiku Abubakar's 2019 presidential campaign and the formal unveiling of a policy document that contains what he describes as his vision for a prosperous Nigeria.

Mr Abubakar has spent the preceding months criss-crossing the country, engaging Nigerians on key elements of his 'Get Nigerian Working Again' slogan, with economy, unity and national security taking the front-row.

Nigerians would now get a chance to see the entire document when it is unveiled on Facebook and Twitter at 12:00 p.m. today, which is only a few minutes away. The handles are: Facebook.com/Atiku.org and Twitter.com/Atiku.

Mr Abubakar said the document would be uploaded on his campaign website, Atiku.org, shortly after the live broadcast, and Nigerians home and away are encouraged to download and review its components.

Citizens are also advised to send in questions from Facebook and Twitter during the broadcast, using especially the official hashtag: #TheAtikuPlan.

Mr Abubakar, Nigeria's vice-president between 1999 and 2007, is launching his campaign a day after President Muhammadu Buhari unveiled his re-election roadmap at an event in Abuja.

Over the weekend, Mr Abubakar, who emerged candidate of the main opposition platform at a convention widely deemed free and fair in October, travelled to Yola, the capital of his home state of Adamawa, from where he would appear on Facebook.

Keep this page regularly refreshed for the latest from the announcement when it kicks-off at noon.

In 2018, I sought the ticket of the Peoples Democratic Party to fly their flag as a presidential candidate of Nigeria.

Today, I am formally launching my campaign. Too many of our people are not doing well economically.

The most important question is, are you better off than you were four years ago?

So many politicians have made policies they cannot deliver one. I am not here to just make grandiose promises, but promises that are achievable.

I have worked with experts over the past several years.

We brought telephone connections from a few hundred thousands to over 100 million today. We were able to achieve this because we had a plan.

One thing I have learnt from travelling across the country is that our people need jobs. Without jobs, people would continue to live in poverty. I am here to restructure the polity and get Nigeria working again.

If elected president, I will be proactive in attracting investment and supporting small and medium scale enterprises.

I plan to create 2.5 million jobs annually and lift 50 million people out of poverty in the next eight years.

Our SME venture capitalists initiatives will help people out of poverty. My plan will lead to vast increast in internally generated revenues.

I started off as an orphan selling firewood in Adamawa State, today I am here.

Thank you for watching. May God bless you and bless the Federal Republic of Nigeria.

Nigeria Has No Future Under Buhari, Says Atiku's Strategist

Nigerian Presidential Elections 2019 - Making an Informed Choice
Tagged:
Copyright © 2018 Premium Times. All rights reserved. Distributed by AllAfrica Global Media (allAfrica.com). To contact the copyright holder directly for corrections — or for permission to republish or make other authorized use of this material, click here.