Swaziland Has No Cash to Pay Elderly Pensions, Prime Minister Says He Will Fly Business Class to Save Money

Swaziland/Eswatini is so broke that pensions for the elderly are not being paid. State-controlled radio has been broadcasting the news over the past few days.

It is another example of how the kingdom ruled by King Mswati III has been mismanaged. The pensions for people aged 60 and over, known locally as elderly grants, are for E400 (US$30) per month.

About 70,000 people receive the grants which often are the only income a family has.

A year ago it was reported more than 80 percent of women aged 60 and over and 70 percent of men in Swaziland lived in poverty. The figures were contained in the National Strategy and Action Plan to End Violence in Swaziland: 2017 to 2022.

About seven in ten of Swaziland's 1.1 million population live in abject poverty defined as having incomes less than the equivalent of US$2 per day. The report said poverty among people aged 60 or over was highest compared to other age groups.

News that elderly grants cannot be paid comes as the new government in Swaziland announced 'cost-saving' measures. At a press conference on Thursday (22 November 2018) Prime Minister Ambrose Dlamini announced that senior government officials would no longer fly first class when they travelled abroad on official business. In future they would go by business class.

He also shelved a plan to buy new top-of-the-range vehicles for himself and the Deputy Prime Minister. Cars recently rented for the use of Cabinet ministers will be returned.

Swaziland is broke and as of 30 June 2018 owed a total of E12.9 billion, the equivalent of 20.8 percent of the kingdom's GDP. Of that nearly E3 billion is owed to suppliers of goods and services.

Hospitals and health centres across Swaziland have run out of medicines, including vaccines against polio and tuberculosis, because drug suppliers had not been paid.

In June 2018 it was reported that children collapsed with hunger in their school because the government had not paid for food for them. The kingdom had previously been warned to expect children to starve because the government had not paid its suppliers for the food that is distributed free of charge at schools. The shortage was reported to be widespread across the kingdom.

Meanwhile, King Mswati III who rules Swaziland as one of the world's last absolute monarchs, wore a watch worth US$1.6 million and a suit beaded with diamonds weighing 6 kg, at his 50th birthday party in April. Days earlier he took delivery of his second private jet, a A340 Airbus, that after VIP upgrades reportedly cost US$30 million. He received E15 million (US$1.2 million) in cheques, a gold dining room suite and a gold lounge suite among his birthday gifts. He now has two private planes, 13 palaces and fleets of top-of-the-range BMW and Mercedes cars. 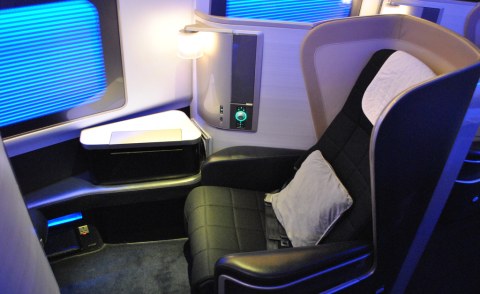 No More First Class Flights for Top Eswatini Govt Officials
Tagged:
Copyright © 2018 Swazi Media Commentary. All rights reserved. Distributed by AllAfrica Global Media (allAfrica.com). To contact the copyright holder directly for corrections — or for permission to republish or make other authorized use of this material, click here.