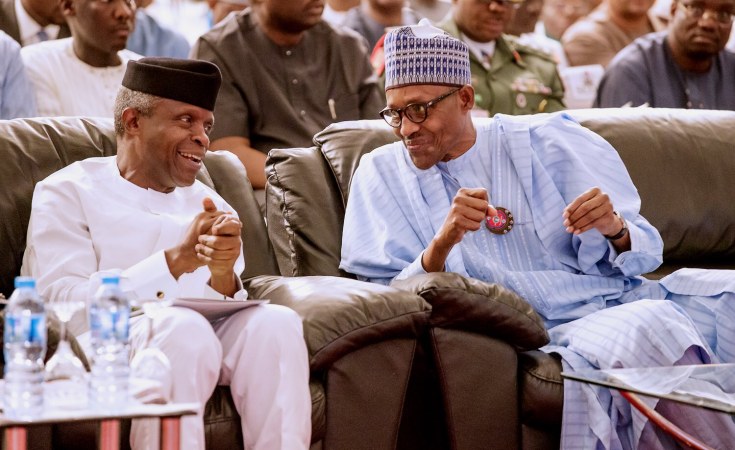 Abuja — President Muhammadu Buhari Friday in Abuja declared that he would ensure that all corrupt public officials who misappropriate public funds and make life difficult for the people are sent to jail.

This is as the former Governor of Benue State and Senator representing Benue North West in the senate, George Akume has accused the Benue State Government of being behind the farmers/herders clashes which have claimed many lives and destruction of property worth several millions of naira.

President Buhari who met behind closed-doors with the All Progressives Congress, APC, stakeholders led by Senator Akume at the Presidential Villa, Abuja, said leaders who undermine the economy by denying workers their benefits, while stuffing personal accounts with public funds will not escape the current anti-corruption dragnet.

He said the Federal Government's bailout to states and Paris Club funds were basically to alleviate the sufferings of the people, describing misappropriation as unjust and unfair to workers.

According to him, "I honestly don't know how people sleep when workers have not been paid. The workers have to pay rent, buy food, send their children to school and they have healthcare to take care of.

"I assure you that my main interest is all Nigerians in all parts of the country. Therefore, if anybody who tries to create any impression that I prefer any group across ethnicity or religion let him dare me by being caught red handed stealing public funds. I will deal with him," he said.

The President in a statement by his Special Adviser on Media and Publicity, Chief Femi Adesina, told the APC delegation that the Federal Executive Council had been monitoring the plight of workers across the country and utilisation of the bailout and Paris Club funds by some states.

"I thank you for your courage to come and see me. This visit has resuscitated our morale," he said.

He noted that the Federal Government had made significant progress in diversifying the economy by investing in agriculture and encouraging more individuals and entrepreneurs to go into farming, pointing out that Nigeria would soon become self-sufficient in feeding its citizenry.

"We are proud of what we have achieved with resources at our disposal," he added, listing ongoing road, rail, sea port, airport and power projects as hallmarks of his administration's commitment to improving lives.

President Buhari said the Ministry of Agriculture and the Central Bank of Nigeria will be further motivated to work together and support all interested Nigerians to take up farming on commercial scale.

He noted that the killings across the country, including Benue, Zamfara and Taraba, were carried out by "ungodly" people who had no religious or ethnic inclinations.

"We know about herders. The ones we knew carried sticks, and sometimes cutlasses to cut foliage for their cattle. We now have people who carry AK 47s and pretend they are herdsmen.

"We are working hard to secure our borders. We are going to see how the old cattle routes can be opened. We will control movement. Please beg our people to be patient," he said.

The President pointed out that security personnel were already uncovering the network of the killers and arresting them.

In his remarks, the leader of the delegation said the narrative in the state about the Federal Government was fast changing for the positive as more people had discovered the good intentions of President Buhari to secure lives and property, and alleviate poverty.

"Mr President, we know your commitment to Nigeria. We know how much you love the country and will be ready to die for the good cause," Sen. Akume said.

Akume, a former governor of Benue State, told the President that APC members had started sensitization and mobilisation of voters for the 2019 elections, noting that more had accepted the party and its manifesto in the state.

He commended the President for the flag-off of the dualization of the Abuja-Keffi-Lafia-Makurdi road, urging more attention on the Makurdi-Otukpo road and the water projects in Gboko and Otukpo.

"You have worked hard to stop herdsmen and farmers clashes in Benue. It is important to note that many people used religion and ethnicity to score cheap points. Religion was used in Benue for sinister purposes," he added.

On corruption, Akume said the President has made significant difference by tackling perpetrators.

Speaking to State House correspondents, the former Senate Minority Leader claimed that the opposition Peoples Democratic Party wasted the nation's resources without any meaningful achievement for 16 years, adding that though the party wants to come back to power, it has no message for the people.

Akume said he was aware of those behind the herders/farmers clashes in Benue State but, assured that the situation has been significantly brought under control.

According to him, "When you talk about herdsmen and farmers clash, it is a story going good bye. Have you heard of farmers/herders clashes in Benue again? No. We know those who were behind that, government was behind that. I am talking about the state government through the Livestock Guards; they knew what was going on. So it is now a thing of the past."

On the backlog of salaries, pensions and gratuities in the state, Akume alleged that there was ongoing fraud in government which has made it impossible for the governor to meet up with this critical obligation to the state workforce.

He said, "And as for him, certainly he knows that there is fraud on the payroll. I have been in government before, everything that is going on there is fraudulent in Benue State and the people are simply tired on this misinformation that they have been receiving.

"If you cannot provide infrastructure what are you doing there, what is the basic purpose of government? It is the welfare of the people, security for the people. If you say your slogan is my people first and we are telling you no, my people last because you are misappropriating their money. So, it is not my people first, it is my pocket first in Benue State."

He explained that the meeting with the President and APC stakeholders from Benue State was a solidarity visit to express total sense of involvement and commitment to his re-election.

He said, "A man who has worked so tirelessly to turn around the fortunes of this country, deserves to be supported by all well meaning Nigerians. This has nothing to do with politics."

Buhari to Corrupt Leaders - You Will Not Escape Jail

I'm Alive! - Buhari Reassures Nigerians in Poland
Tagged:
Copyright © 2018 Vanguard. All rights reserved. Distributed by AllAfrica Global Media (allAfrica.com). To contact the copyright holder directly for corrections — or for permission to republish or make other authorized use of this material, click here.