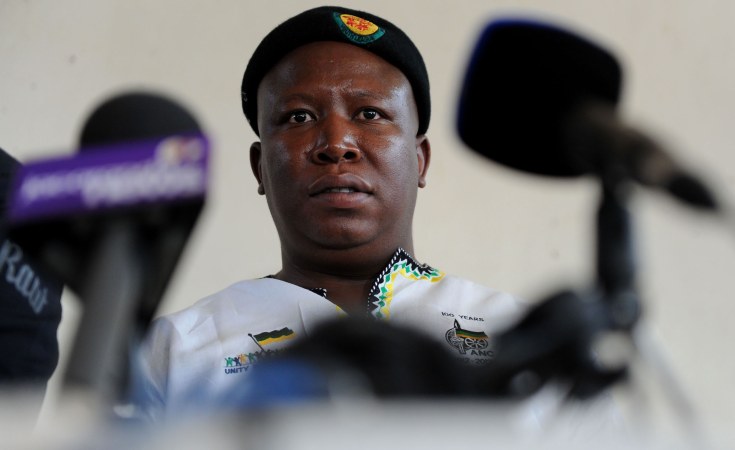 EFF leader Julius Malema on Sunday continued his attack on Public Enterprises Minister Pravin Gordhan, saying he was guilty of double standards when it came to public scrutiny of his daughter.

"When it's an Indian daughter, it's fine: case closed. No need for a bank statement," Malema told those gathered at the Economic Freedom Fighters' Manifesto Consultation Assembly in Pretoria.

Yet, he said when black African politicians had family members allegedly involved in work for the government, a different standard was applied.

"If Pravin says 'don't involve my daughter', [this is respected]... If I say don't involve my cousin or mother, [he is told]: 'No, you can't say that, you are a public representative."

He said that the same had applied when it came to allegations of impropriety about former president Jacob Zuma's sons Duduzane and Edward, as well as former finance minister Nhlanhla Nene's son, Siyabonga - "but when it is Indians and whites - they say: 'don't involve our children'".

Yet, suggested Malema: "Corruption is corruption".

Last week, Malema launched a scathing attack on Gordhan outside the venue where the minister was testifying before the Zondo commission of inquiry into state capture.

At the time, he called Gordhan "corrupt", "a dog of white monopoly capital" and claimed Gordhan hated black people.

He also made claims over contracts involving Gordhan's daughter, Anisha, saying they were allegedly awarded by National Treasury and other government departments, seemingly as a result of her father's position in government.

On Sunday, Malema also raised his anger at "white monopoly capital" - saying insourcing was an example of that.

He did not have warm words for President Cyril Ramaphosa either, saying neither former president Thabo Mbeki, nor Zuma had finished their terms - insinuating Ramaphosa must take cognisance of the vulnerability of his position.

On Friday, speaking at another public participation meeting in Polokwane, Limpopo, Malema claimed that some government ministers had housing bonds with VBS Mutual Bank and were tipped to switch them to mainstream institutions before the start of the investigation by advocate Terry Motau.

"They (the ministers) were told to move their bonds to mainstream banks," he said.

Malema also claimed that some VBS executives told investigators that they had given money to the SA Communist Party but were surprised the information did not reflect in the final report.

He further added that he was in possession of a transcript in which some people, including bank executives, were repeatedly asked by investigators if the EFF had received money from the bank.

Malema said "some people" people were trying to silence the EFF over the VBS scandal.

Those present at the meeting spoke of the constant conflicts between communities and mining companies in the region.

The conflicts were over land, environmental degradation, unfulfilled promises by companies and lack of job opportunities, among others.

Malema, however, rallied the members to fight against companies and authorities, describing businessman Patrice Motsepe - who also owns platinum mine in the Sekhukhune area, Limpopo - as "an agent of white monopoly capital".

He threatened that the land owned by mining companies would be taken away.

"We must never be afraid of dying. They can't kill all of us. There may be those who will remain and go on with the fight," he said.

He attacked white people and blamed them for the land challenges in the country: "We are here because of white people who looted the land. The looting of VBS is nothing compared to the looting of the land," he said.

Bar Council, Corruption Watch Hit Back At Malema for Attack On Zondo Commission