As the industrial action embarked on by the Academic Staff Union of Universities (ASUU) enters its fourth week, the union has vowed not to return to class until its demands are met.

This was disclosed in a statement by the ASUU National President, Biodun Ogunyemi, on Sunday.

PREMIUM TIMES reported how the lecturers commenced an indefinite strike on November 5 for reasons including government's failure to adhere to previous agreements and poor funding of universities.

Ten days after the declaration of the strike, the first meeting between the Nigerian government and the lecturers ended without resolution of the dispute.

After the meeting, Mr Ogunyemi said the government appears insincere in relating with the lecturers.

In his statement on Sunday, Mr Ogunyemi said the union's "struggle is still alive," and the strike would continue.

"We met with the Honourable Minister of Education in line with our tradition to honour all invitations with openness to meaningful discussion of issues contained in our demand, so far, nothing concrete has come out of the meetings; rather it is still a projection of their 'keep-them talking' culture.

"Our members are enjoined to disregard any information from any source other than the official union source which is the branch chairperson," he said.

The professor also warned university authorities against undermining the "strike by organising or attending meetings, examinations, lectures, convocations, conferences or other activities during the strike."

He said any examination taken during this period will be challenged by ASUU after the strike.

"Our commitment and integrity are the basis of our pride as Academics. We must avoid actions that undermine our struggle," he said.

The strike has forced hundreds of thousands of Nigerian university students to be out of school with many of them complaining about the situation.

Various students who spoke with PREMIUM TIMES expressed their displeasure over the incessant strike in the educational sector and failure of government to meet the demands of their teachers.

Ade Quadri, a 200-level student of PHE at the Lagos State University told our correspondent that the failure of government to adhere to the demands of lecturers will further worsen the reputation of Nigerian universities.

"This present situation is the reason why it will be difficult for us to see our schools rated top in the world. The strike action should not have occurred if government do the needful," he said.

Adeosun Jeleel of the University of Ibadan said: "Education is the most important sector but our leaders will never take that serious. You can imagine what we are made to pass through. Four years should be four years but the case is not the case here," he said.

Peace Udofia of the University of Benin said: "I'm a final year student counting days left for me in school but I can't really say if I will use additional years with this. No project supervisor; on strike. All on strike."

Efforts by PREMIUM TIMES to get the reaction of the Minister of Education, Adamu Adamu, to the ongoing strike was unsuccessful as at press time as he refused to answer calls and text messages sent to him.

Previous Story
ASUU Vows to Continue With Strike
Next Story

ASUU Vows to Continue With Strike 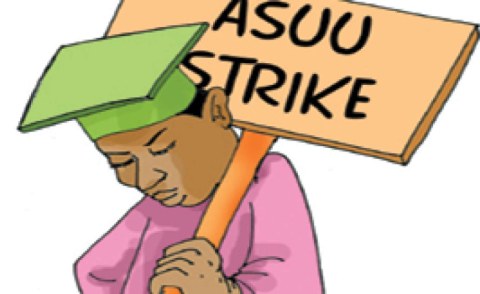 How Can Nigeria Fix the Legacy of Colonial Violence? #EndSARS
Human Rights