South Africa: EFF Hits Back At Gordhan With Charges of Their Own 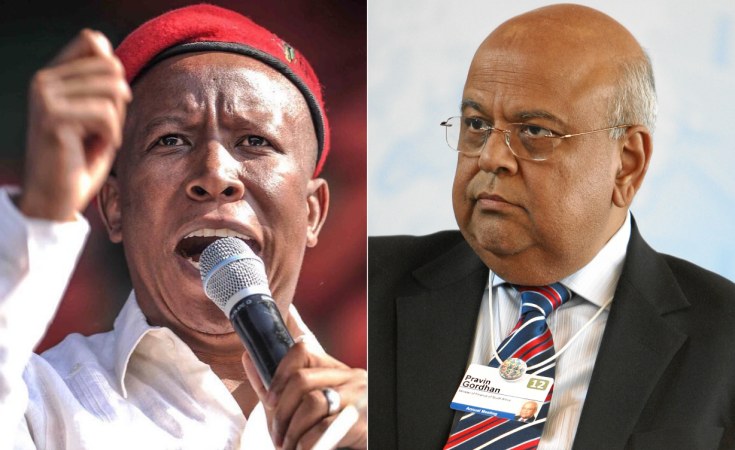 Following charges laid by Public Enterprises Minister Pravin Gordhan against EFF leader Julius Malema on Monday, the red berets have hit back, announcing that they will lay charges, including corruption and money laundering, against the minister on Tuesday.

In a statement issued on Monday, the EFF announced that a criminal case involving money laundering, corruption, racketeering, fraud, perjury, as well as contravention of the Intelligence Act and Prevention and Combating of Corrupt Activities Act, will be opened against Gordhan.

The party said it would open the case at the Brooklyn police station in Pretoria, which is the same police station that Gordhan used to open cases of criminal defamation and crimen injuria against Malema and EFF deputy president Floyd Shivambu.

In addition to two criminal charges laid on Monday, Gordhan will also be laying a complaint of hate speech against Malema, following some of his comments made recently.

The minister was referring to comments made by Malema on November 20 outside of the Zondo Commission, where he reportedly said "... there will be causalities. There can even be a loss of life [sic]. If you're not ready for that, stand aside".

Last week, Malema launched a scathing attack on Gordhan outside the venue where the minister was testifying before the commission of inquiry into state capture.

He called Gordhan "corrupt", "a dog of white monopoly capital" and claimed that he hated black people.

He also claimed that Gordhan's daughter, Anisha, had benefited from government and Treasury contracts because of her father.

Gordhan has strongly denied that his daughter did business with the state, adding that these lies and attacks on his family were totally unacceptable.

"You can't call us dogs and you can't spread wrong rumours about families that are absolute lies as well," Gordhan told media outside the police station.

"If you want to argue with us politically, that's fine, but once you lie and you attack families, and you propagate these lies widely enough, but you also start dividing South African society, then it is totally unacceptable. Because race is a very inflammable factor in South Africa."

A News24 investigation revealed that much of what the EFF claimed to be evidence that Anisha had benefited due to her father's role as a government minister, in fact, showed this to be untrue.

Gordhan also told media that he would lay a complaint of hate speech against Malema and Shivambu with the Equality Court.

He said the statement by the two EFF leaders were clearly intended to be hurtful, incite harm and promote hatred, and thus constituted hate speech as contemplated by the Equality Act.

Gordhan's attorney Tebogo Malatji told the media that, in terms of the complaint in the Equality Court, the minister was seeking an unconditional apology and damages of R150 000 to be ordered by the Court jointly and severally against Malema and Shivambu.

If successful, the damages claimed would be donated to a charitable organisation that supported job creation for unemployed youth.

"Propagating hate in society has to be stopped. We invite all South Africans to say we cannot believe in this nonsense," Gordhan said.

"It is time for all South Africans to take a firm stand against racism, lies and fake news, and contribute to the building of a united, non-racial and non-sexist democratic South Africa. All of us, as South Africans, must continue to fight corruption in the private sector and in the state."

When contacted for comment about the charges laid against him, Malema refused to reply, saying only: "Ja, get your reaction from your racist editor Adriaan Basson."

Calls to EFF spokesperson Mbuyiseni Ndlozi for comment went unanswered and, while Shivambu answered News24's call, he hung up as soon as comment was asked for.