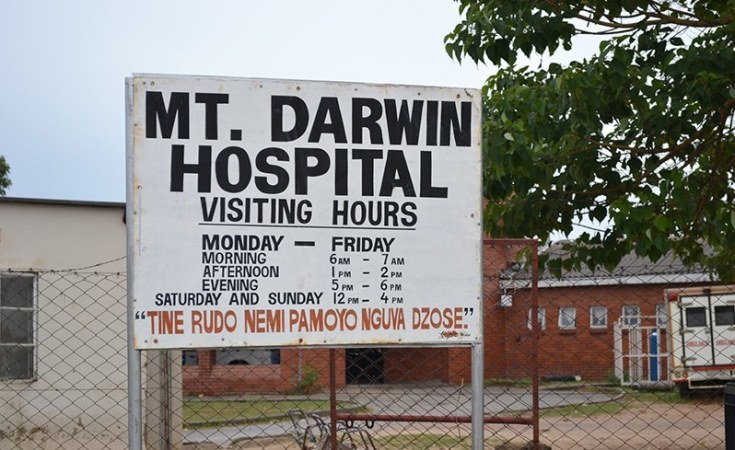 Two people died of cholera, while 26 others have been admitted at Mt Darwin District Hospital suffering from the waterborne disease. Mt Darwin district nursing officer Sister Anna Chinyemba confirmed that one person died on Sunday, while another died yesterday morning.

Sister Chinyemba said all the cases were reported in the artisanal mining area of Mukaradzi. The Ministry of Health and Child Care has since called for an urgent meeting in an effort to combat the deadly disease.

"We have a problem of cholera which broke out on Sunday," said Sister Chinyemba.

"So far, we have 26 patients who are admitted at Mt Darwin District Hospital. We have two deaths so far. The other patient who was affected died on their way to the hospital and another patient died yesterday at the hospital.

"The affected people are artisanal miners from Mukaradzi mining area. We are trying all that we can to assist the affected. We are still investigating the source of the cholera. We have sent some samples to the laboratory to ascertain that it is cholera although we are treating it as such."

The World Health Organisation has since announced that it is setting up a cholera treatment camp in Mt Darwin as reinforcement.

Mukaradzi Mine is 25 kilometres from Mt Darwin and fears are that the disease could spread to other neighbouring districts like Bindura.

"We suspect that the outbreak could have been caused by poor sanitation, since most of the mining activities taking place in the area are illegal," said Sister Chinyemba.

"The area is congested with artisanal miners and there is illegal vending taking place there. The area does not have safe water sources. Most of the people affected are men."

Sister Chinyemba said Government was making frantic efforts to try and combat the disease and avoid a possible spread to its environs.

"Although as a hospital we are prepared to deal with cholera, indications are that the number could go up and we might soon be overwhelmed," she said.

"We will need assistance and reinforcement from Government to bolster our personnel and medicine stocks. We urge people in the district to practice good hygiene to prevent cholera. We also urge people to report cases of diarrhoea and abdominal disorder early to avoid loss of lives."

When The Herald visited the hospital, cholera patients were not isolated neither was it decontaminated, causing a serious health threat to other patients and health personnel.

Zimbabwe Capital's Water Supply Cut to the Bone
Tagged:
Copyright © 2018 The Herald. All rights reserved. Distributed by AllAfrica Global Media (allAfrica.com). To contact the copyright holder directly for corrections — or for permission to republish or make other authorized use of this material, click here.