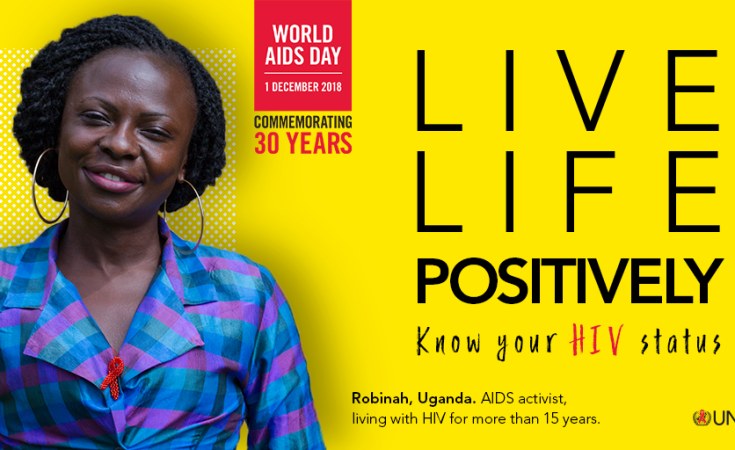 This week I was lucky enough to meet Audrey Nosenga, a young woman from Zimbabwe. Against a backdrop of friends losing parents to AIDS, and the stigma and discrimination shown toward people living with HIV in her community, Audrey became a peer educator and counsellor. This reception was one of the many events held as part of the ENDAIDS2030 Festival over the week of World AIDS Day, to raise awareness of HIV among the public and unite the domestic and international HIV sectors towards the goal of eradicating AIDS by 2030.

Audrey's work, providing support to young people living with HIV, helping them to come to terms with their diagnosis and adhere to treatment, is a welcome reminder of the scale of the challenge remaining in the fight against AIDS.

Today marks the 30th Anniversary of World AIDS Day. On World AIDS Day we remember those who have lost their lives to AIDS and renew our commitment to Sustainable Development Goal 3.3, which includes ending the epidemic of AIDS by 2030. We also seek to raise public awareness about HIV and mobilise support for UK leadership in the global HIV response.

We have undoubtedly come a long way since the first World AIDS Day back in 1988. We now know how to prevent and treat HIV, enabling people living with HIV to live long and healthy lives.

Despite this incredible progress, last year nearly 1 million people died of AIDS-related illnesses globally and 1.8 million people were newly infected with HIV. About half of the people who newly acquired HIV identify as part of a key population group (sex workers, transgender people, men who have sex with men and people who use drugs) or have a partner who does. AIDS remains a leading cause of death among women of reproductive age, and three quarters of new HIV infections in Sub Saharan Africa are among young women aged 15 to 19 years old.

Why, despite rapid scientific progress over the past thirty years, are people still dying of a virus we know how to prevent and treat?

Around half of the world's population still does not have access to essential health services, and last year 100 million households were pushed into extreme poverty because of health expenses. Ill health means that people are not able to work, to support their families and contribute fully to their communities.

This conundrum is a story of the impact of both poverty and inequality. Until quality public services are universally available and free at the point of use, we will not end AIDS. More than that, without strong health outcomes, equitable development is not possible.

That's why a Labour government would spearhead a global movement for universal, free, high quality and gender responsive public services. We will set up a Universal Health Coverage Centreto provide technical assistance and funding to support low and middle-income countries to strengthen and expand their own free universal public health systems. Access to HIV services will be an integral part of this. We will ensure that access to quality HIV services extends to the populations that need it the most. We know that, often, civil society is best placed to reach the most marginalised groups and we will work to strengthen these connections and support the third sector.

Audrey's work in the community reminded me of the scale of the challenge remaining in the fight against AIDS, but her inspiring activism as a young advocate also gives me hope. On this World AIDS Day, we must also recognise the importance of the support given to young leaders in their communities from organisations like STOPAIDS and the International HIV/AIDS Alliance.

With dedicated and inspiring young leaders like Audrey at the forefront of the global HIV response, backed by strong public health care and organisations, we can end AIDS by 2030.

Stepping Up the Fight Against HIV Infections
Tagged:
Copyright © 2018 Thomson Reuters Foundation. All rights reserved. Distributed by AllAfrica Global Media (allAfrica.com). To contact the copyright holder directly for corrections — or for permission to republish or make other authorized use of this material, click here.