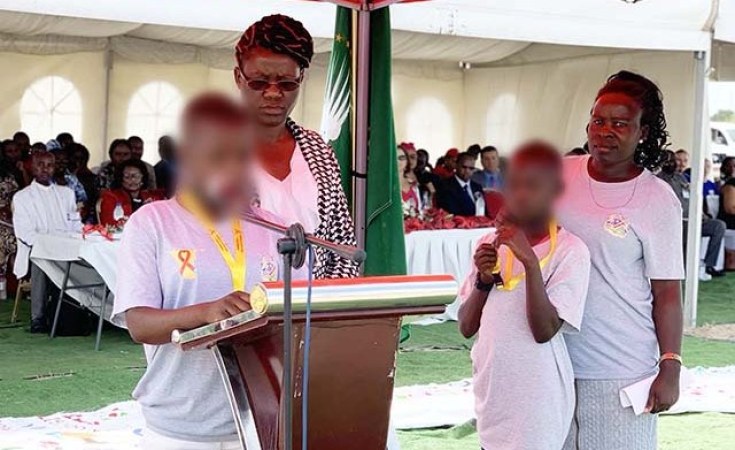 The Namibian
Rosa Mwadikange, 17, and Magano Haiduwa, 12, were born HIV positive. The lack of prenatal HIV care by their mothers led to their lifelong burden.
The Namibian (Windhoek)
By Tuyeimo Haidula

Rosa Mwadikange* walks to the podium and announces: "I am standing here to tell you about my life from the day I was born HIV-positive".

There was a moment of dead silence. Everybody else listened attentively as Rosa and a health official stood to tell her story.

Rosa was nervous, as well as emotional.

"For 17 years, I have lived in mockery," she continued.

And today, she once again had no idea how the people she would share her story with would react.

Rosa's story is one example of how people living with HIV continue to face discrimination and stigmatisation, 30 years after the virus became known.

According to the United Nations Population Fund, Rosa was one of the 3% of Namibian children born to infected mothers, who never benefited from the prevention of mother-to-child transmission (PMTCT) programme which provides antiretroviral treatment (ART) to pregnant HIV-positive women.

She said growing up with the virus was not easy as she would get sick on numerous occasions, and cry throughout the night due to unbearable pain. She lived with her grandmother, who took care of her. The grandmother has since died.

Her health condition made her start school late, and she is now in Grade 9. As if that was not enough, the discrimination from her classmates and the community posed various challenges on her health and education journey.

So strong was the discrimination and stigma that when Rosa asked to be accompanied by a parent or guardian to the clinic, no one was willing to go with her.

"I used a tin as my cup because people refused to share theirs with me. No one wanted to eat with me. I was not using everything that everyone else was using in the house. I felt isolated," she explained.

There was no support from her family at home, but it did not end there.

Rosa paused for a while, and continued: "It was complicated being at school, and pupils were always pointing at me and writing my name on the toilet walls. I would come to class, and my name would be on the chalkboard as they made fun of my status. Sometimes, they would write in my school books when we went for a tea break."

To cope, she became part of a teen support group at the Oshaango Clinic in the Ohangwena region. This has kept her going, as she got to meet other children who were also born with the virus. The club meets every second month, and they share information on the importance of taking medication, and how to live positively.

"The teen club has become my second home because it is where I find joy and comfort. I am proud I have overcome my challenges. I am well. I take my medication every day, and I do not even look like someone who is HIV positive," Rosa said.

She added: "I go alone to get my ARV medications, and I can now take them every day by myself."

She advised expecting mothers to test early for HIV as soon as they learn that they are pregnant so that they can start treatment.

Haufiku said: "It is disheartening when children are discriminated against. It is the worst to hear, especially knowing that most still go through judgements from society".

He said if Namibia implements preventative strategies, the HIV prevalence rate could be reduced, and eventually eliminated by 2030.

Preventative measures include the favourite ABC: short for abstaining, being faithful and using condoms, as well as circumcision as some of the successful ways to contain the further spread of the disease.

The executive director of the Namibia Network of AIDS Service Organisations (Nanaso), Sandi Tjaronda, said discrimination and stigma must end if Namibia is to reduce HIV-AIDS infections.

When she completed her speech, tears flowed freely down Rosa's cheeks as the audience came forward to comfort her. "It was agonising to relive the moment".

Unlike Rosa, 12-year-old Magano Haiduwa* has the support of her family. She too was born HIV-positive.

Magano said it was one morning, she couldn't remember the date, when her mother woke her up to take medication.

She wanted to know why she was taking medication. Her mother said to her: "In the world, there is a disease called HIV-AIDS, and we lost millions of people because there was no medicine to assist people to live longer.

"But now we are lucky that there is medication for infected people, including you and me. Your brother and sisters do not have HIV, but it does not mean that I don't love you; it's only that I did not have enough information about the disease".

Magano said she was worried, and every morning she would wake up around 06h00 to take her medicine. However, many times she would refuse to take them. But "my mother would say, Magano, I love you, and I need you to take this medication properly and on time".

One day, Magano said when she and her mother went to the Eenhana ART clinic, she met her classmate as well as her neighbour. "I told my mother that I know those children, and my mother said I was not the only one with the disease," she added.

Magano said she was motivated from there onwards to keep taking her medication and to lead a healthy lifestyle.

* Not their real names.

Why Knowing Your Status is Still a Huge Hurdle on World Aids Day
Tagged:
Copyright © 2018 The Namibian. All rights reserved. Distributed by AllAfrica Global Media (allAfrica.com). To contact the copyright holder directly for corrections — or for permission to republish or make other authorized use of this material, click here.