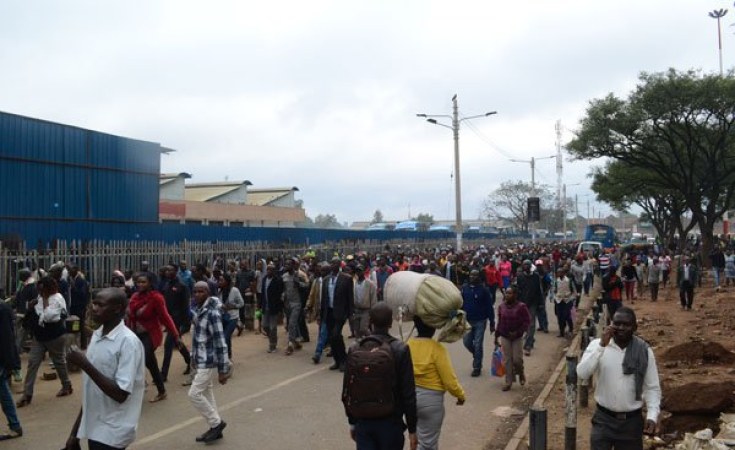 Sila Kiplagat/Daily Nation
Commuters walk to work in the CBD after being dropped off at the Railways terminus on December 3, 2018.
Capital FM (Nairobi)
By Racheal Mburu

Nairobi — The High Court has declined to suspend the ban on matatus from accessing the Nairobi Central Business District, in a case filed by 21 Saccos.

Justice Pauline Nyamweya has now scheduled the hearing for Thursday, when the Nairobi County Government will be required to defend itself.

The Saccos are accusing City Hall of failing to seek their views before effecting the ban, which they say will not only hurt commuters but the economy as well.

But Nairobi Governor Mike Sonko has defended the move, saying the ban will remain in force because it is aimed at restoring sanity in the public transport sector as part of measures to decongest the city.

Relief as Sonko Makes U-Turn on Nairobi Matatu Ban
Tagged:
Copyright © 2018 Capital FM. All rights reserved. Distributed by AllAfrica Global Media (allAfrica.com). To contact the copyright holder directly for corrections — or for permission to republish or make other authorized use of this material, click here.

Who Is Really In Charge of DR Congo?
Health