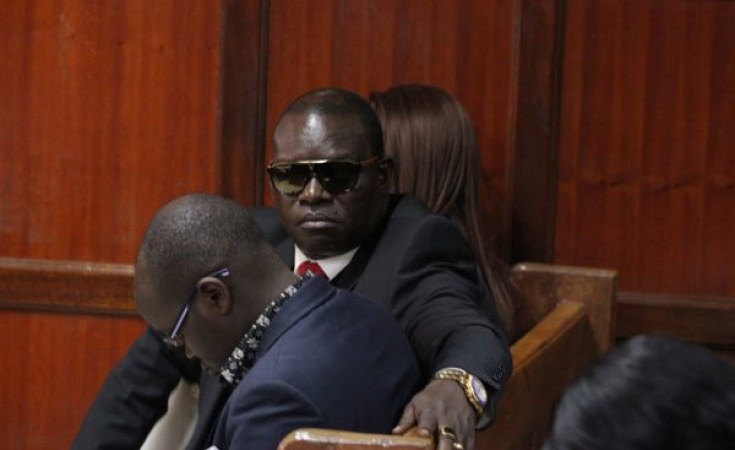 Photo: Dennis Onsongo/Daily Nation
Businessman Paul Kobia at the Milimani Law Courts where he filed a case against the ban on matatus from the city centre introduced and suspended by Governor Mike Sonko.
The Nation (Nairobi)

The High Court has rejected Nairobi Governor Mike Sonko's ban on matatus accessing the town centre, pending the determination of the case by businessman Paul Kobia.

Governor Sonko started enforcing the restriction on Monday, as part of plans to decongest the central business district, bus suspended it on Tuesday after the public and business people in the matatu industry complained. Some politicians also opposed the move, noting it requires proper planning.

The businessman filed a suit seeking orders to bar Mr Sonko from implementing the May 12, 2017 gazette notice that stopped passenger service vehicles from picking up and dropping off commuters in the CBD.

Mr Kobia noted that the public was not consulted before the change was implemented and that no measures were put in place to cater for people including the physically challenged.

The petitioner also pointed out that in countries such as South Africa and Egypt, rapid public transfer systems were put in place before bans were effected to prevent inconveniences.

Mr Kobia further said that in 2011, Governor Sonko obtained orders restraining the government from implementing the ban on matatus.

He wants steps taken to ensure people such as pregnant women, the sick, the elderly, the physically challenged and children are catered for before the ban takes effect.

Groups of the disabled were among those who accompanied him to court on Tuesday.

Mr Sonko suspended the ban "with immediate effect" to allow talks with "all affected parties" for the sake of a lasting solution to congestion in the city.

The about-turn, he said, was informed by the suffering of commuters, matatu operators, employers and business people on Monday.

"I have noted with concern the plight of Nairobi residents as a result of the ban and hereby announce that the full implementation of this directive has been suspended with immediate effect," he said.

“This is to facilitate further consultation with all affected parties, in order to find a lasting solution to the problem of vehicular congestion”.

A Transport ministry engineer said solutions to the traffic problem involve three steps: private vehicles should be discouraged from entering the CBD, pedestrian walkways should be improved to encourage more people to walk to their destinations and the public transport system in the country should be regulated.

The engineer further noted the danger of private ownership of PSVs, saying they follow their own rules and this should not be the case.

Nairobi's Public Transport System Set for Major Makeover in 2019
Tagged:
Copyright © 2018 The Nation. All rights reserved. Distributed by AllAfrica Global Media (allAfrica.com). To contact the copyright holder directly for corrections — or for permission to republish or make other authorized use of this material, click here.