Nigeria: 2019 - 'Not Too Young to Run' Organises Conference to Mentor, Train Young Candidates

Ahead of the 2019 general election, the 'Not Too Young To Run' group has said it would organise a conference to prepare and mentor youth who have emerged candidates in their various political parties, across the nation.

This was disclosed at a press briefing on Wednesday.

Ibrahim Faruk of the 'Not Too Young To Run', a campaign which seeks to reduce the age limit for running for elected offices in Nigeria and globally, said the gathering would have a 12-talk session and six master classes and is scheduled to hold from December 10 to 12, 2018 at the Shehu Musa Yar'Adua Centre, Abuja.

The conference, tagged "The Convergence: Power, Capacity, Politics", aims to equip the young candidates to build their network and competence with the right attitude and values, which would enable them deliver good governance and quality representation in Nigeria.

The candidates were selected from 91 registered political parties. Four hundred young candidates are expected to attend the conference.

"The convergence is the largest gathering of youth candidates drawn from 91 registered political parties. 400 youths candidates are expected to attend this conference," he said.

"It would have 30 speakers, which include countries in Africa, with leaders with inspiring stories how they emerged the winner at their elections," he added.

He also explained that the selected candidates were beneficiaries from the legislative bill passed by the National Assembly.

"Most of them are direct beneficiaries of the Not Too Young To Run legislation passed by the National Assembly," he said.

At the event, Ernest Ereke, an official of the organisation, said the youth would be exposed to how to be able to use crowd funding to make funds and they would also be exposed to the legal framework that govern elections.

There would also be enlightenment on "campaign funding, so they would know that there are certain areas they are not supposed to accept funds as well as the ways they are to accepts funds" he added.

A member of the movement and founder of Connected Development (CODE), Hamzat Lawal, explained how the Not Too Young selected over 400 youth who emerged flag bearers of their political parties.

Previous Story
Not Too Young, but Too Poor to Run?
Next Story

Not Too Young, but Too Poor to Run? 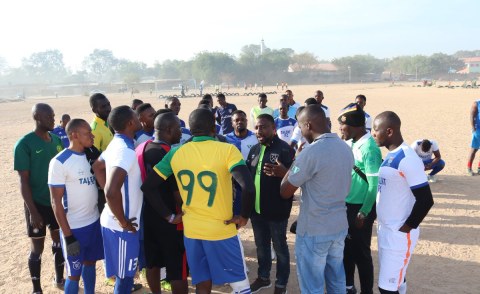 'Young People Have The Power to End Conflict in Nigeria'
Tagged:
Copyright © 2018 Premium Times. All rights reserved. Distributed by AllAfrica Global Media (allAfrica.com). To contact the copyright holder directly for corrections — or for permission to republish or make other authorized use of this material, click here.