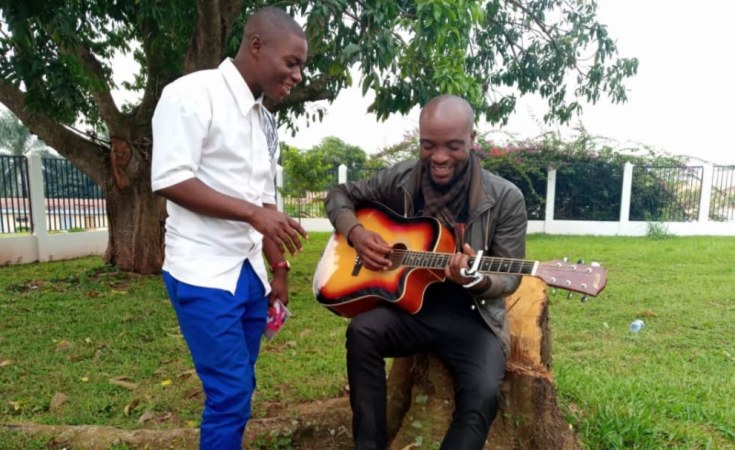 Two musicians are traveling through Cameroon's English speaking regions in the hope that their musical messages of peace will reach rebels and help end the secessionist conflict. DW's Moki Kindzeka reports.

Law graduate turned musician Linford Ci tunes his guitar as he gets ready for a performance in the small town of Santa in Cameroon's Northwest Region.

The 31-year-old traveled to the rural town together with Emmanuel Bilashi to preach a message of peace.

"We are tired of war, violence. We need a bright future," says Bilashi.

"If anything is wrong in the house, you yourself, you must contribute. ... That is what motivated us to bring our music to our fellow brothers, our fellow sisters. Let them drop their weapons - violence is not what we need but peace and love."

The two musicians founded their duo four months ago when both lost family members and friends in the secessionist struggle in Cameroon's English speaking regions. Several hundred civilians have been killed in the conflict, hundreds of thousands are internally displaced and thousands have fled to neighboring Nigeria.

Armed just with their voices and a guitar, the duo's melodic acoustic songs in both English and French talk of the consequences of war and call for the fighters to put down their arms.

The lyrics continue to ask both the government of Cameroon and the armed gangs to grant children their basic right to education.

"We are tired of war, violence. Schools are locked up, our brothers and sisters are being killed every day and things are not moving... . Let them drop the weapons. Violence is not what we need but peace and love," Bilashi says.

Both Bilashi and Ci believe their music can reach those young men who join the armed gangs.

The two musicians have performed in several villages throughout the region, such as Nkwen, Sabga, Mbengwi and Bambui, even though armed gangs regularly attack the area.

"Everything is all about the love you have for your nation," Bilashi says.

"There are people who died for the nation. If that is the case for some one to lose his life for many to be saved, then so be it."

One of those who have listened to the peace crusaders is 27-year-old Nina Kima. She believes music can work magic.

"We say music kisses the heart. [The fighters] are human beings. They have hearts also. They can listen to the song and even dance. It is like a call of the heart because singing is coming from the heart. We have seen it in other countries and it has brought in a lot of stability, a lot of peace."

Bernard Okalia Bilai, governor of the English speaking Southwest Region also appreciates the duo's efforts. He says the government of Cameroon has asked his administration to give amnesty to those who surrender.

"We need to rescue them. We have some young men there who have been involved by force. Those misguided children should come back," Bilai told DW.

Does New Generation of Unschooled Cameroonians Mean New Conflict?
Tagged:
Copyright © 2018 Deutsche Welle. All rights reserved. Distributed by AllAfrica Global Media (allAfrica.com). To contact the copyright holder directly for corrections — or for permission to republish or make other authorized use of this material, click here.