Khartoum — A CHILD is among seven people executed in South Sudan this year, a record for the world's newest country.

Human rights groups now fear for the lives of another 135 people on death row after authorities rounded them up to two prisons where further executions are to be carried out.

The spate of state-sanctioned killings appears to have been sparked by the Director-General of the National Prison Service, Henry Kuany Aguar.

In April, he ordered all death row prisoners held at county and state prisons to be moved to the notorious death chambers- Wau and Juba Central Prisons.

A least one child and a breastfeeding mother are among those reportedly transferred.

"The transfer of 135 death row prisoners to prisons in Juba and Wau where all executions have taken place so far is deeply alarming," said Joan Nyanyuki, Amnesty International regional director.

Nyanyuki lamented the execution of people, even children, in South Sudan coincided with the world abandoning the death sentence.

Since independence in 2011, South Sudanese courts have sentenced at least 140 people to death. Authorities have executed at least 32 people.

"The President of South Sudan (Salva Kiir Mayardit) must stop signing execution orders and end this obvious violation of the right to life," Nyanyuki said. 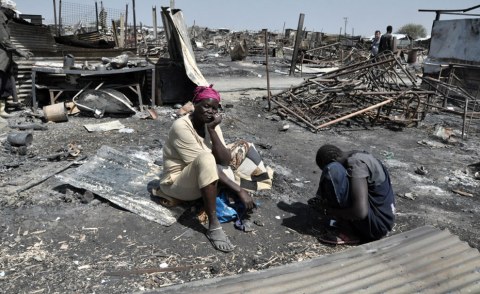 South Sudan Conflict Five Years on
Tagged:
Copyright © 2018 CAJ News Agency. All rights reserved. Distributed by AllAfrica Global Media (allAfrica.com). To contact the copyright holder directly for corrections — or for permission to republish or make other authorized use of this material, click here.