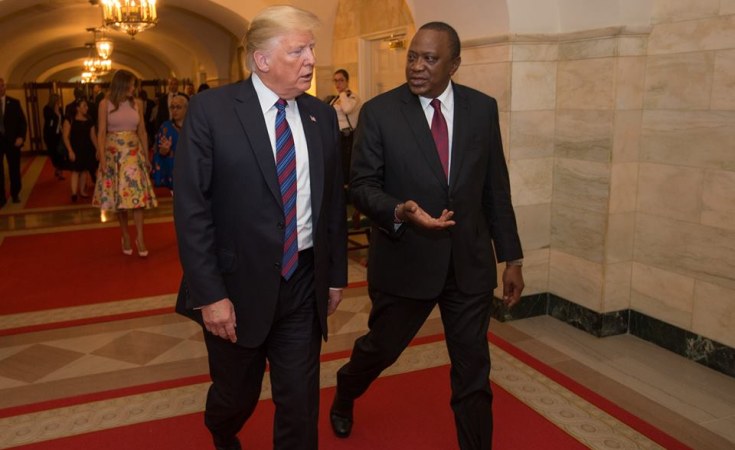 Kenya will reportedly be named an "anchor" country when the Trump administration unveils its Africa policy on Thursday.

National Security Advisor John Bolton, known for his hard-line foreign-policy views, is set to outline a new approach to Africa that puts emphasis on countering perceived threats to US interests on the continent, posed in particular by China.

The Trump team's initiative is said to entail efforts to enhance relations with Kenya and other African countries viewed as regionally important and as prime targets of China's moves to gain political and economic advantages on the continent.

"The White House strategy is expected to name several countries as anchors for the US strategy, and experts close to the administration expect the list to include Kenya, a longstanding US ally," NBC News reported on Monday.

Mr Bolton, a former US ambassador to the United Nations, will present the long-awaited Africa blueprint in a speech at the Heritage Foundation, a Washington think tank generally supportive of President Trump's policies.

Joshua Meservey, the Heritage Foundation's Africa specialist, said in an email on Tuesday that US corporations will be encouraged to invest in select African countries.

"I expect that part of operationalising enhanced relationships with countries will include trying to facilitate, in various ways, US companies' greater involvement in Africa," Mr Meservey told the Nation.

"I expect Ambassador Bolton will reaffirm the administration's recognition of geopolitical competition as the most urgent challenge to US interests," Mr Meservey added.

"In the Africa context, that means responding especially to China, but also Russia, Iran and the DPRK [North Korea]."

The Trump approach is also expected to give lessened importance to counter-terrorism operations in Africa, which has been the centrepiece of Washington's approach to the continent in the 21st century.

Mr Meservey, however, cautioned that "the US is unlikely to ignore terrorism and other security concerns as part of its Africa strategy. It is too pressing a problem to ignore."

US military assistance to Somalia is thought likely to be sustained in the new policy.

Thursday's roll-out is intended to demonstrate the Trump administration engagement with Africa as the continent had been treated for many months as an afterthought in US global calculations.

Mr Trump expressed his dismissive view early this year by using a vulgar term to describe African countries. And in a meeting with several African leaders last year, he referred to Namibia as Nambia.

The new policy will not include additional funding for aid, diplomacy or intelligence-gathering, NBC News reported.

The plan will also not involve heightened US attention to human rights issues in Africa. This will likely lead critics in Congress to argue that the Trump approach resembles China's hands-off posture in regard to repressive practices by the African governments it is courting.

Previous Story
Tibor P. Nagy, Jr. Speaks on Promoting U.S. Interests in Africa
Next Story
U.S.-Africa Policy on the Skids - 10 Things Pompeo Can Do To Fix It Quickly

U.S.-Africa Policy on the Skids - 10 Things Pompeo Can Do To Fix It Quickly

Debating U.S. President George H.W. Bush's Africa Legacy
Tagged:
Copyright © 2018 The Nation. All rights reserved. Distributed by AllAfrica Global Media (allAfrica.com). To contact the copyright holder directly for corrections — or for permission to republish or make other authorized use of this material, click here.