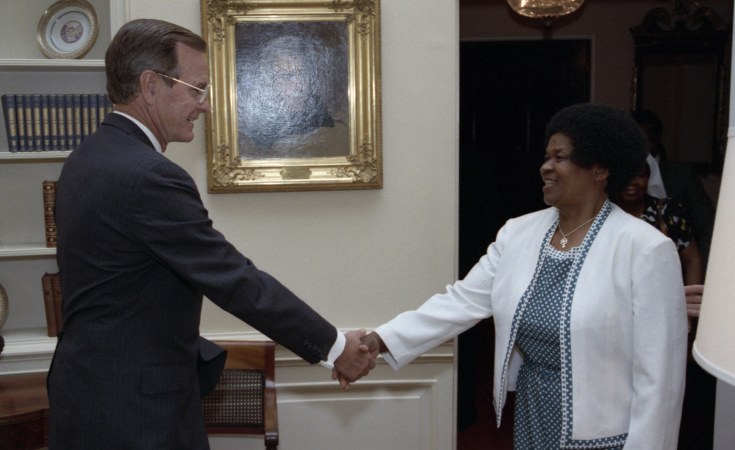 George Bush Presidential Library and Museum
Albertina Sisulu, co-president of the United Democratic Front, met George H. W. Bush with a UDF delegation in the White House on June 30, 1989, after Bush had signalled a desire to see the African National Congress included in talks to end apartheid.
allAfrica.com
guest column By Herman Cohen

Washington, DC — President George H.W. Bush found Africa worthy of his attention, and as his assistant secretary of State for African affairs, I found his optimism towards the continent encouraging.

“There is no reason why Africans and their governments can’t do as well as people in other regions,” he would say, and he worked to see that America helped.

Both as president and through his numerous other foreign-facing roles, Bush understood Africa’s potential, as well as the basis for its struggles. Bush supported financing democracy and good-governance programs in Africa, but our emphasis was on conflict resolution: he saw that there could be no progress in development while wars cut all of the gains. Bush’s hands-on approach led to a number of outstanding successes in the drive to end African conflicts, and made possible the creative development programs instituted by subsequent administrations.

In Bush’s first year as president, Soviet leader Mikhail Gorbachev complained to Bush in a meeting that despite spending billions of dollars propping up ostensibly “Marxist” governments in Ethiopia and Angola, there was no end in sight for the decades-long civil wars in each country.

The president asked me to find a way to bring peace to those two countries. The American diplomacy that followed — including Bush’s personal intervention with heads of state — resulted in peace agreements for both countries.

The post-colonial chaos in Angola was mirrored in Mozambique, where the end of Portuguese rule gave rise to a ferocious civil war. Bush again saw an opportunity to settle an African conflict through negotiation. He invited President Joaquim Chissano to the Oval Office in 1990, where Bush argued that the government could not expect the international community to solve their internal problem.

He reminded Chissano that the RENAMO group — which was leading a tribal rebellion with South African support — was made up of Mozambicans, not “men from Mars,” and they could be negotiated with. It took some time, but negotiations supported by intense U.S. assistance yielded a peace agreement in November 1992, which has successfully kept the country at peace since.

When F.W. de Klerk began to imply his support for an end to apartheid in South Africa, Bush took the initiative, promising to lift crippling U.S. economic sanctions against the regime as soon as it became clear that whites were serious about ending the discriminatory system. Needless to say, de Klerk’s moves were unpopular with apartheid’s hardcore white supporters. Bush’s perceptive move reassured them that the United States would seek and support a fair democratic outcome of the negotiation process which would not give them short shrift in the coming dispensation.

Even after entering the proverbial “lame-duck” period following his defeat in the 1992 election, President Bush continued his focus on Africa. Anarchy in Somalia had led to constant violence and a horrible humanitarian crisis. Images of suffering Somali families and children appeared on TV and in newspapers. Bush decided the United States should intervene with Operation Restore Hope, which sought to get the situation under control long enough for United Nations blue helmets to take over. By the time American forces were relieved the following May, the famine was greatly relieved. Hundreds of thousands of lives were saved.

Bush’s work abroad is most often associated with the collapse of the Soviet Union, but Africa and Africans were deeply important to him. Throughout his public service he made many African friends, and a steady flow of African visitors, official and unofficial, marked his time in the White House. He saw Africa not as a faraway and unknowable place, but as a continent of people not so different from us: friends worth making time for. Of all Bush’s legacies, that friendship may prove among his most lasting.

Previous Story
The Roots of Sudan's Upheaval
Next Story
Will Detente Lead to Democratic Reform in Ethiopia And Eritrea?

The Roots of Sudan's Upheaval

Will Detente Lead to Democratic Reform in Ethiopia And Eritrea?

The Trump 'Prosper Africa' Strategy - Primacy or Partnership?
Tagged:
Copyright © 2018 allAfrica.com. All rights reserved. Distributed by AllAfrica Global Media (allAfrica.com). To contact the copyright holder directly for corrections — or for permission to republish or make other authorized use of this material, click here.