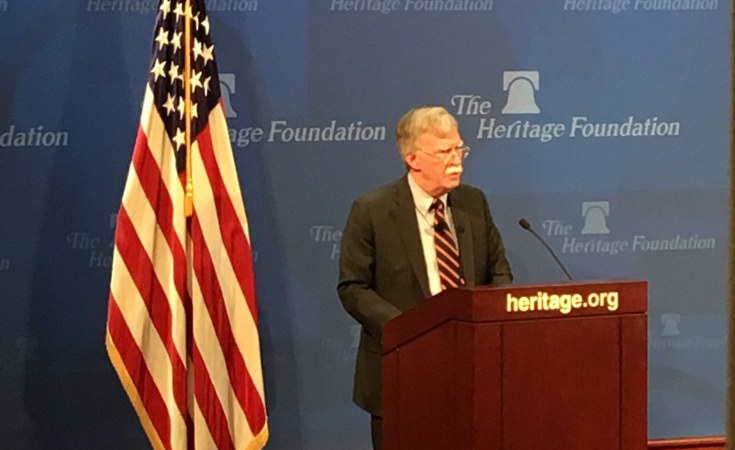 US National Security
"Under the President’s new Africa Strategy, we will expand economic ties on the basis of mutual respect, help African nations take control of their economic destinies & security needs, & ensure that U.S. foreign assistance in the region gets results for the American people." - Ambassador John Bolton.
allAfrica.com

Bolton said the plan was approved by Trump yesterday and will be executed "immediately" after an "intensive interagency process".

He also pointed out that the release of the strategy comes two years earlier than President Barack Obama unveiled his Africa plan, saying he was proud to finalise this strategy for the Trump administration two years in to his first term.

Here is an excerpt of what Ambassador Bolton said:

"We prioritised this document with the understanding that lasting stability, indepedence, security, and prosperity on the African continent are in the interest of national security of the United States.

"Under our new approach, every policy we pursue, every decision we make, every dollar of aid we spend will further US priorities in the region.

"In particular the strategy addresses 3 core US interests on the continent:

"First, advancing US trade and commercial ties with nations across region to the benefit of both the United States and Africa. We want our economic partners to thrive, prosper and control their own destinies. In America's economic dealings, we ask only for reciprocity, never for subservience.

"Second, countering the threat of radical Islamic terrorism and violent conflict. Isis, Al Qaida and their affilates all operate and recruit on the continent, plotting attacks against American citizens and targets. Any sound US strategy twoards Africa must address this serious threat in a comprehensive way.

"And 3rd, we will ensure that US taxpayer dollars used for aid are used efficiently and effectively. The United States will no longer provide indiscriminate assistance across the entire continent without focus or prioritization, and we will no longer support unproductive unsuccessful and unaccountable UN peacekeeping missions.

"We want something more to show for Americans' hard-earned taxpayer dollars. Under our new African strategy we will target us funding towards key countries and particular strategic objectives. All US aid on the continent will advance US interests and help African nations move towards self-reliance."

Previous Story
Defining the Trump Africa Strategy - Primacy or Partnership?
Next Story
U.S., China Plus Russia in Africa - Will It Mean a 'Best Deal' for Africans?