Kenya: Tough Balancing Act for Kenya As China and U.S. Battle for Its Heart 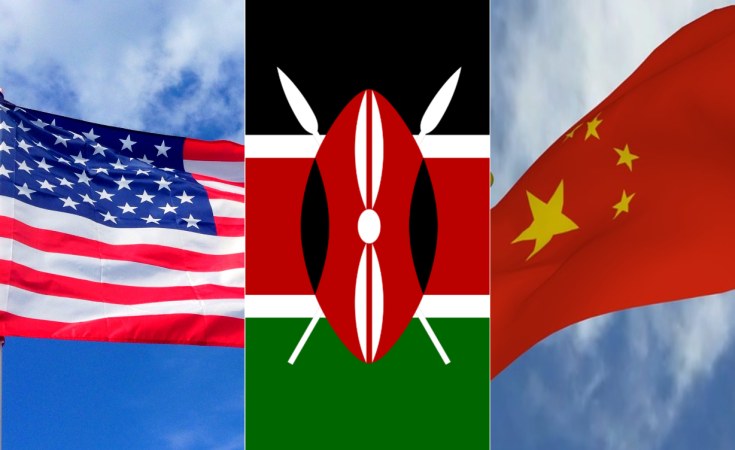 allafrica.com
From left to right: Flags of the U.S., Kenya and China.
The Nation (Nairobi)
By Gerald Andae

The United States has once again renewed its war with China as it seeks to tame its influence in Africa, particularly in Kenya, which has enjoyed a lot of financial support from the Asian nation.

Kenya has been named one of the "anchor country" in the region for President Donald Trump's foreign policy on the continent. The development puts Kenya at cross-roads, where it will have to delicately balance its interests alongside that of the two countries.

Kenya has borrowed heavily from China with the current loans as at September standing at Sh549 billion. However, Kenya must also find a way to maintain a good relationship with US, which is the country's major trading partner.

Economist Ally Khan Satchu says Kenya has to please the two countries because of the interests that it has in both.

"Kenya has borrowed heavily from China. The projects for which the borrowing was undertaken are unlikely to be sustainable at the booked price. Kenya is best off keeping both sides at the table but if push comes to shove, we are more likely to tack to the West," said Mr Satchu.

The two countries have recently been embroiled in vicious tariff wars and Mr Satchu argues that US is using all means to tame Beijing's influence.

"The US is certainly bearing it's fangs with respect to China. The tariff war, Freedom of Navigation Operations all over the South China Sea all speak to a more aggressive US and therefore it was expected that we would see spillover into African affairs," he said. "The US wants China to feel pain and to bow," said the economist in an interview with the Sunday Nation.

The Trump team's initiative is said to entail efforts to enhance relations with Kenya and other African countries viewed as regionally important and also as prime targets of China's moves to gain political and economic advantages on the continent.

Since 2015, China has been Kenya's major market for imports after it toppled India from position one.

Beijing, which is the world's second biggest economy after the US, shipped in goods worth Sh390.62 billion in 2017, a 15.75 per cent growth over Sh337.46 billion in 2016, according to government official statistics.

President Uhuru Kenyatta has been calling on Chinese firms to set up more bases in Kenya through joint ventures with domestic companies.

Exports of duty-free goods to the US under the African Growth and Opportunity Act (Agoa) decreased by Sh1.6 billion last year as the capital investment too went down. The goods, mainly textile products, declined from Sh34.4 billion in 2016 to Sh32.8 billion last year.

The Agoa programme allows Kenya and other sub-Saharan African countries to export identified goods at preferential terms to the US, exempting them from paying tax.

Other exports to the US that recorded increased earnings last year included coffee, edible nuts and tea.

The Agoa initiative which was expected to end in 2015 after the initial deadline of September 2012 was extended by the US lawmakers for another 10 years.

The extension of Agoa, commonly referred to as the Third-Country-Rule, marked a major relief for players in the Kenyan textile industry because it helped guarantee supply of raw material.

Previous Story
U.S., China Plus Russia in Africa - Will It Mean a 'Best Deal' for Africans?
Next Story
Trumps' Africa Policy Opens Door for China to Expand Influence

Russia Growing Its Strategic Influence in Africa
Tagged:
Copyright © 2018 The Nation. All rights reserved. Distributed by AllAfrica Global Media (allAfrica.com). To contact the copyright holder directly for corrections — or for permission to republish or make other authorized use of this material, click here.