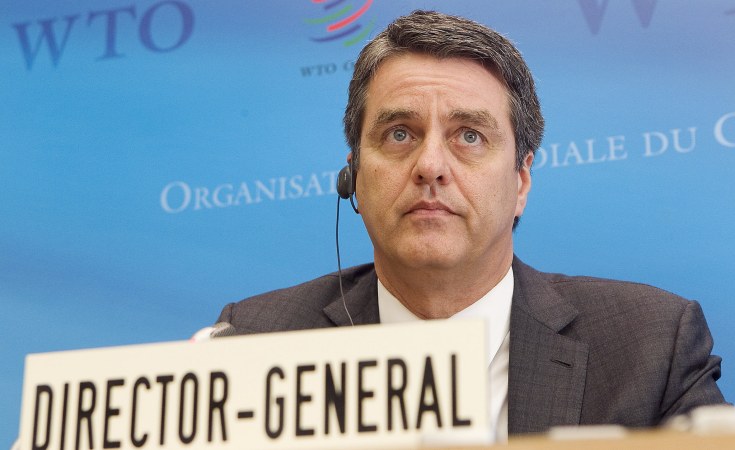 There is an air of resignation to failure at the World Trade Organisation (WTO) in Geneva. Long-stuck trade negotiations and a recent eruption of a virus of economic nationalism and protectionism are confronting the organisation with its gravest existential crisis.

The most imminent crisis is that the Appeal Body - the final arbiter on trade disputes - faces imminent seizure. It's down to three judges, the minimum for a quorum, because the United States (US) is blocking new appointments, believing the Appeal Body is overreaching itself.

If the Appeal Body stops, so will the dispute settlement system and therefore also, effectively, the rules-based global trade order. Then it would be every man for himself, 'the law of the jungle' as European Union (EU) ambassador to the WTO Marc Vanheukelen put it this week. This raised the spectre of the world returning to the economic chaos of the Great Depression which paved the way to World War II.

The rules-based system has started to unravel with a trade war simmering between the US and China over unilateral import tariffs, prompting other countries to ignore the WTO and also impose their own tariffs unilaterally.

The World Trade Organisation has always made its decisions by consensus

The organisation had become rather moribund before these new crises anyway. In the 23 years since the Uruguay Round of negotiations ended with the creation of the WTO itself, there has been only one major multilateral trade deal, the Trade Facilitation Agreement of 2015. But there's been no agreement at all on the essence of the organisation's work, which is negotiating rules to deepen trade liberalisation.

The so-called Doha Development Round, which is supposed to negotiate such new trade rules, has been stalled since 2001 by fundamental differences, many of them between developed and developing countries, on issues such as agricultural subsidies and industrial market access.

Developed countries say they are prepared to continue negotiating the Doha issues. But Vanheukelen says they can't see any reason to expect a breakthrough after over 15 years of different factions presenting the same arguments. Developed countries also believe the Doha Round doesn't reflect current global economic realities. Three out of the top 10 economies in the world - China, India and Brazil - are now developing countries.

As Vanheukelen complains, in the WTO any country can define itself as developing. So South Korea, Singapore, Taiwan and Hong Kong have done so. That imposes lighter obligations on them than on developed countries.

If the Appeal Body stops, so will the rules-based global trade order

He also points out that with the entry of China, Russia and Vietnam into the organisation in the 21st century, state-owned enterprises have significantly changed the character of global trade. He notes that the WTO is founded on the ethos of international trade 'guided by the invisible hand of the market'. Instead these state-owned enterprises are directed by governments and this allows for all sorts of unregulated state support such as subsidies which are otherwise regulated in the organisation.

Another issue for the EU and others is that many WTO member countries are not keeping up with their obligations to notify the WTO about their trade policies and practices, such as granting subsidies to producers. And they are doing so with impunity.

Kessie notes that the nature of trade has also dramatically changed over the past two decades, with new issues like e-commerce, state-owned enterprises, investment facilitation, competition policy, medium, micro and small enterprises and trade and gender coming to the fore.

As a result of all these blockages and changes, the EU and other developed countries have proposed a series of reforms to the organisation. These try to reform the Appeal Body and the dispute settlement process more generally; improve the monitoring of member countries' trade policies and practices; differentiate among developing countries; and break the logjam in rule making.

The latter is the most controversial. The organisation has always made its decisions by consensus. Now the EU and the developed countries more broadly are proposing to break the logjam in rule making - on issues like e-commerce, investment facilitation and competition policy - by adopting decisions by majority vote, i.e. by making decisions through coalitions of the willing. This is being called a plurilateral rather than a multilateral approach.

South Africa, speaking for itself and the Africa group, is strongly in favour of resolving the Appeal Body crisis, warning that 'unless and until members address this core issue, not only existing rules but also any discussion of new WTO rules or reform will be redundant'.

But Pretoria and Africa are strongly opposed to most of the other reforms, including the plurilateral approach and to differentiating developing countries. South African Trade and Industry Minister Rob Davies recently told Washington Trade Daily's Geneva correspondent that the reform proposals for modernising the WTO would 'make an unbalanced multilateral trading system even worse' by curtailing the 'policy space' for industrial and economic development in developing countries.

The plurilateral approach would also draw WTO energies away from the priority issues of the Doha development road like agricultural trade, he says. Davies also opposed the idea that more advanced developing countries, including South Africa, might lose their concessions if developing countries were differentiated.

Vanheukelen insists that South Africa and Africa have nothing to fear from the plurilateral approach. If the countries in the coalitions of the willing get together to cut, say, subsidies between themselves, this can only benefit those countries that aren't in the coalitions.

Kessie suggests that Africa needs to be realistic and should consider participating in the joint, plurilateral initiatives and generally work closely with other WTO members to unblock negotiations as a strengthened multilateral trading system is in the interests of Africa.