Africa: Kenya Could Lose Its Mombasa Port to China Over SGR Debt 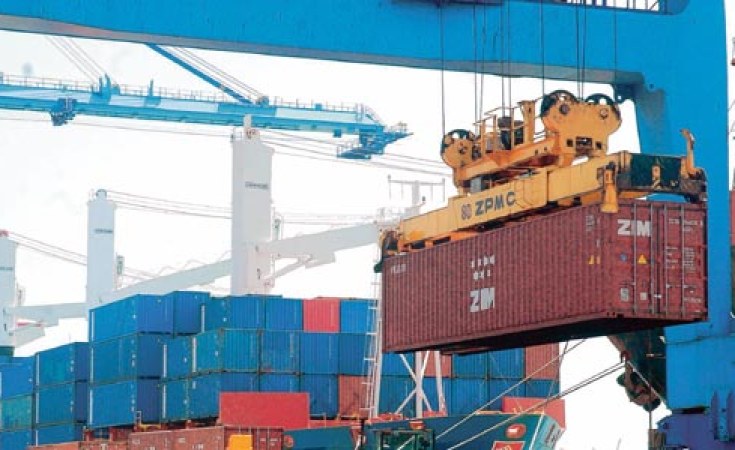 Photo: The Daily Nation
A container is offloaded from a ship at Mombasa port (file photo).
The Exchange (Dar es Salaam)
By Kawira Mutisya

The loan was used to construct the standard gauge railway (SGR), using Kenya Ports Authority's (KPA) revenue as collateral for the government's debt.

According to a letter sent to the Kenya Ports Authority by the Auditor General, the payment agreement means that the Authority's revenue would be used to pay the debt if the minimum volumes required for consignment are not met.

From the report, China Exim bank would become a principle in over KPA if KRC defaults its obligations and the bank exercise power over the escrow account security.

This arrangement is biased since any non-performance or dispute with the bank would be referred to arbitration in China, whose fairness in resolving the disagreement may not be guaranteed.

The authority did not disclose this guarantee in the financial statements.

The Auditor general has therefore called on KPA to disclose pertinent issues and risk related to the guarantee in the financial statements. It has also been urged to confirm in the management representation letter the KPA assets are not a floating charge/guarantee to the government of Kenya loan as the borrower.

KPA container operations manual order 7 procedures, requires the senior clerical assistant to confirm that the electronic delivery orders (EDOs) have been mapped into CATOs with the correct information and if any variances found are reported to the shipping agent immediately and a terminal hold placed.

According to the Director of the African Department at the International Monetary Fund Mr Abebe Aemro Selassie, at the end of 2017, average public debt in the region was 57 per cent of its GDP, an increase of 20 percentage points in just five years.

"While this is well below the peaks of the early 2000s, the current spike is concerning." he said.

The IMF official also noted that most countries that have funded development and infrastructure through borrowing have failed to generate sufficient additional tax revenues to repay that debt.

"In many cases, countries have not been effective at capturing the return on their investments through their tax systems." he said.

And this is what has just happened in the Kenyan scenario. According to IMF, in a handful of countries, poor governance can also be blamed for unsustainable debt practices.

"As we have been saying for some time, if governments stick to their medium-term fiscal-consolidation and reform plans, debt levels should stabilize or decrease, alleviating debt-related challenges." Mr Selassie said adding that the required adjustments have been delayed repeatedly, owing to political constraints, social pressure for much-needed development spending, and favorable external financing conditions.

This is a recipe for long-term pain; there is no scope to delay the adjustment any longer. As countries work to meet their development goals, it is essential that they move debt sustainability to the top of the policy agenda.

How to redeem ourselves

According to the IMF official, for this to happen, four key areas will need special attention, depending on country circumstances.

"First, in resource-intensive countries, especially the region's eight oil exporters, fiscal consolidation plans must be enacted without delay. This should be coupled with economic diversification, for which the recent recovery in commodity prices provides wider scope." He said.

In much of the rest of the region, the required fiscal adjustment is more modest and can be achieved through steady increases in tax revenues. In most cases, there is potential to raise revenue by 3-5 percentage points of GDP over the next few years. Reaching this level will require broadening the tax base, streamlining exemptions, and strengthening the administration of value-added tax.

"Third, efforts should be made to account for off-balance-sheet risks, improve debt-management capacity, and enhance data coverage of debt and debt exposure." He said adding that "And, fourth, governments must improve prospects for private investment."

For decades, public expenditures offset low levels of private investment. But, faced with growing public-debt vulnerabilities, it is unclear how long this trend can continue. Sub-Saharan Africa's economies should orchestrate a transition from public to private investment by strengthening regulatory and insolvency frameworks, increasing intra-African trade, and deepening access to credit.

For Kenya, it is a wait and see scenario as Kenyans watch with baited breathe to see how the country will redeem itself from this and not lose its port to the bank, keeping in mind that doing nothing will only constrain it's tremendous potential to achieve sustainable and inclusive growth.

Kenya's Public Debt Soars By $2 Billion in Six Months
Tagged:
Copyright © 2018 The Exchange. All rights reserved. Distributed by AllAfrica Global Media (allAfrica.com). To contact the copyright holder directly for corrections — or for permission to republish or make other authorized use of this material, click here.