Kenya: CJ Maraga and His Wife Evacuated to Nairobi After Nakuru Accident 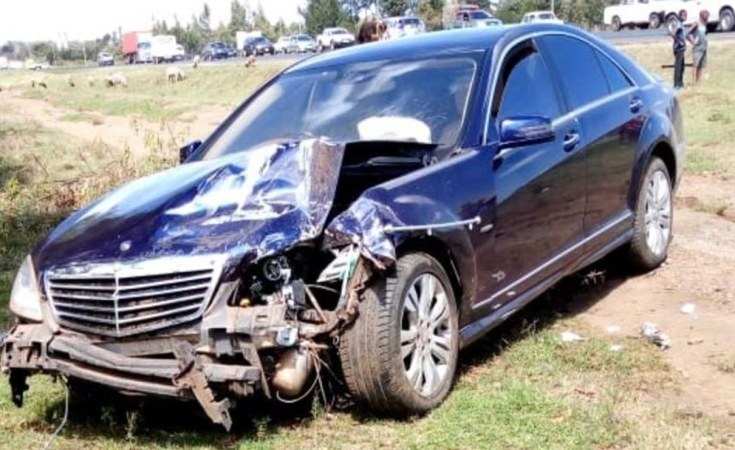 Courtesy
Chief Justice David Maraga’s car which was involved in road accident at Ngata along the the Nakuru-Eldoret highway.
Capital FM (Nairobi)
By Joseph Muraya

Nairobi — Chief Justice David Maraga and his wife have been evacuated to Nairobi for specialized treatment following the Saturday morning accident that occurred in Nakuru.

The couple was first treated at the War Memorial Hospital, before being taken to Lanet Barracks from where they were airlifted to Nairobi by the military.

"We had a minor accident this morning as we were going to church, but we have been attended to. We are fine and there is no cause for alarm," the CJ, who had a bandage on the forehead, told journalists before the evacuation to Nairobi.

"We are just going to Nairobi because everyone wants to be sure that we are fine," he said.

The couple was headed to church in Ngata area, when their vehicle, a dark blue Mercedes Benz collided with another vehicle.

"This was just a small operation which the doctors have managed very well," the CJ said before they were driven to Lanet Barracks for evacuation in a military helicopter.

The driver who caused the accident is also said to have sustained injuries, and was being treated in hospital, but police said they will question him as investigations into the accident got underway.

Soon after the accident, Maraga tweeted, that "My wife and I were involved in an accident in Nakuru this morning on our way to Church. We are undergoing medical observation. My driver and aide who were with us are also okay. We thank God for His mercies."

On learning of the accident, State House said, President Uhuru Kenyatta immediately directed the Kenya Defence Forces to evacuate them to Nairobi for specialized treatment.