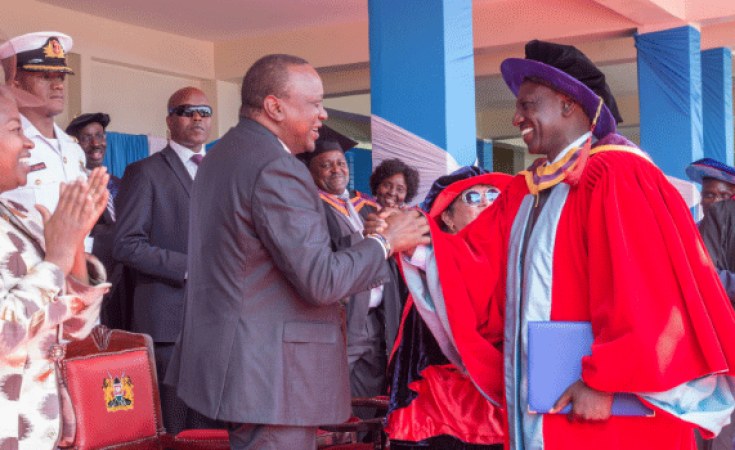 Nairobi — Deputy President William Ruto was on Friday conferred with a Doctorate degree in Plant Ecology by the University of Nairobi, in a ceremony attended by President Uhuru Kenyatta.

Speaking during his graduation, Ruto said, "Nothing has humbled me in my life than braving the grueling demands of attaining the Doctorate Degree that has been conferred on me today. In the course of pursuing this degree, particularly when my supervisors were hard on me, I occasionally interrogated what great men and women of yore thought about education."

President Kenyatta, who spoke at the graduation ceremony also urged Kenyans graduating from higher institutions of learning to use their acquired knowledge to build a strong, united, prosperous and cohesive nation.

He said universities are key to the prosperity of the country as they contribute immensely to the country's human resource development.

The President said an educated population contributes positively to the development and prosperity of the nation, hence the need for those graduating to offer their skills towards achieving the goal of building a better country for all.

"I really hope that each and every one of you, in whatever field you have chosen to specialize in, will be the cream that this nation needs to build a strong, cohesive and prosperous nation," President Kenyatta said.

The President expressed hope that the graduants will be able to use their knowledge to create prosperity and cohesiveness among Kenyans of all walks of life.

"An ignorant person is one who uses pettiness to divide rather than to build but knowledgeable people are those who are able to impart knowledge with hope of creating prosperity, unity, harmony and cohesiveness amongst citizens," the President advised.

He challenged those who graduated today to use their abilities to rise above pettiness that has been the cause of division among Kenyans.

"I pray that you will be able to use the knowledge you acquired to contribute positively to the betterment of this country," he said.

"The most important message about knowledge is about to understand who we are as a people. Our ability to be able to rise above pettiness and be able to see a bigger picture," the Head of State added.

A total of 9,114 graduands were awarded various degrees during the ceremony with 61 receiving PhDs, 2097 Masters, 6015 Bachelors, 50 postgraduate Diplomas, 830 Diplomas and 60 Fellowship Awards.

The Deputy President has been pursuing the doctorate since August 2012 and has today graduated with a PhD in Plant Ecology whose thesis was titled, 'Influence of human activities on land use changes on environmental quality of riparian ecosystems: A case study of Saiwa Swamp watershed, Western Kenya'.

In addition to the newly acquired PhD, the Deputy President holds Bachelors degree in Botany and Zoology and a Masters degree in Plant Ecology, all from the University of Nairobi.

It was a triple celebration of the DP whose 52nd birthday as well as his 27th wedding anniversary falls on the same day.