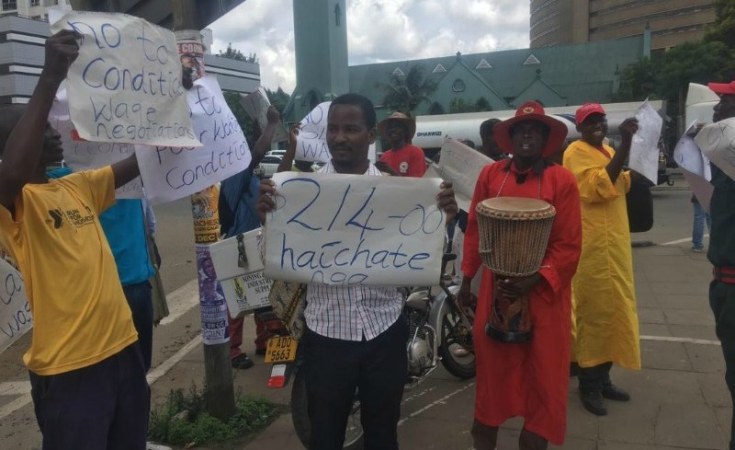 DOZENS of security guards from different companies in Zimbabwe Friday staged a street demonstration in central Harare to press for a hike in their wages.

The placard waving keepers threatened to abandon the premises at which they will be deployed if their employers ignored their demands.

Security guards are paid amounts as little as $214 per month when they are often subjected to constant attacks by daring criminals and the elements of weather during the course of their duties.

Zimbabwe Security Guards Union (Zisegu) secretary general Philemon Nhema said Friday's demonstration was only the beginning of what could turn out to be a major showdown with their employers if their demands were ignored.

"Today (Friday) we demonstrated over the failure by our employers to award us a 10 percent salary increment which we have been fighting to get since 2014," Nhema told NewZimbabwe.com.

"Considering the current economic hardships, we approached our employers and asked them to award us $100 hardship allowances across the board.

As security guards, Nhema said, they believed their employers did not care much about their welfare when it was apparent the firms they were working for made a fortune through their sweat.

"So the demo is just the beginning as we have given the sector's employers to meet our demands before mid-January 2019 and failure to do so will leave us with no choice except to instruct all security guards across the country to down tools and abandon their duties nationwide," Nhema added.

The threats by the country's lowly ranked workers group follow a wave of job actions by civil servants, among them doctors and teachers, who are all demanding US dollar wages from government.

Hard-pressed Zimbabwean workers argue that their Real Time Gross Settlement wages have since been eroded by recent price increases which have seen the asking price of goods and services pegged at three times their September prices.

Previous Story
Teachers Demand Salaries in US Dollars
Next Story

Teachers Demand Salaries in US Dollars

Finance Minister Plans to Reintroduce Zimbabwean Dollar This Year
Tagged:
Copyright © 2018 New Zimbabwe. All rights reserved. Distributed by AllAfrica Global Media (allAfrica.com). To contact the copyright holder directly for corrections — or for permission to republish or make other authorized use of this material, click here.