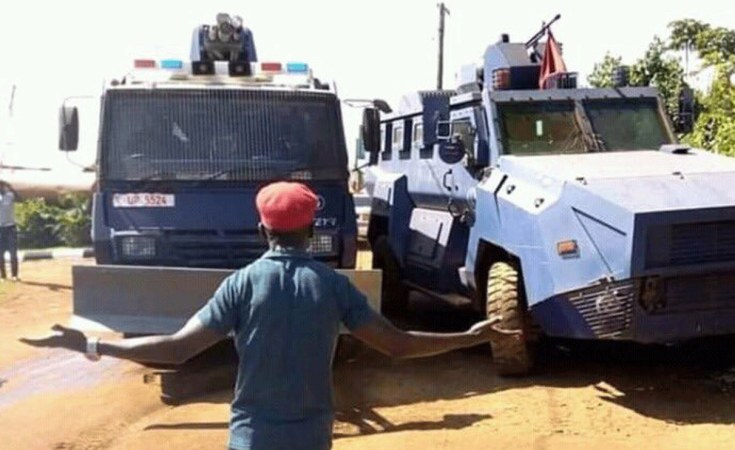 It seems the powers that be in Uganda are hellbent on ensuring that opposition politician and musician Robert Kyagulanyi, better known as Bobi Wine, doesn't enjoy Christmas.

This after the police in Kampala on Wednesday fired tear gas canisters and sprayed pink water to disperse revellers who had camped at One Love Beach, Busabala in Kampala, ahead of Bobi Wine's Boxing Day concert.

In the wee hours of the morning, police and soldiers were deployed at the venue which they cordoned off before arresting Bobi Wine's employees.

Nevertheless, Bobi Wine's fans flocked the venue only to be forcefully sent away by the security forces.

The Uganda Police Force spokesperson Emilian Kayima, in an earlier interview, had said the legislator would not hold his Boxing Day concert as had earlier planned.

"We shall be at Busabala beach to disperse revellers because we shall be protecting them. As far as I'm concerned this concert wasn't cleared because the first things weren't done," he was quoted by the Ugandan media.

@PoliceUg fires teargas to disperse revellers that had started gathering at One Love Beach Busabala for @HEBobiwine 's concert that was scheduled for today. Police says the concert wasn't cleared to take place #NTVNews

The police spokesperson also explained that Bobi Wine did not write to the police seeking clearance for the concert.

This development comes just a few days after Uganda Parliament directed that the unconstitutional blocking of Bobi Wine's music shows be stopped.

However, Bobi Wine claims that he delivered to the police all the necessary paperwork before the concert.

"This development disrespects the parliamentary directive. It is for everybody to see that they are acting with impunity," Bobi Wine later said.

Bobi Wine has literally been a marked man by Ugandan authorities for the better part of this year.

The fast-rising politician, considered the heir apparent to President Yoweri Museveni by some, is currently battling treason charges.

Bobi Wine Calls for Release of Ugandan Activist Stella Nyanzi
Tagged:
Copyright © 2018 Nairobi News. All rights reserved. Distributed by AllAfrica Global Media (allAfrica.com). To contact the copyright holder directly for corrections — or for permission to republish or make other authorized use of this material, click here.