STRIKING doctors have reacted angrily to claims by government that the State assisted them through medical school and that there are enough medicine stocks in the country.

The medical association did not spare Chiwenga who has claimed the junior doctors currently on industrial action are still under the Ministry of Higher Education.

"The Minister of Health and Child Care Mr O Moyo and his Deputy Dr J C Mangwiro have misinformed the Acting President General CDGN Chiwenga on the reality of the prevailing situation in the health sector.

"This act is a poor attempt at covering up their shortcomings in the Ministry and a smear campaign on the doctor's," the statement reads in part.

After a whistle-stop visit to Parirenyatwa Hospital and government drugs manufacturer Natpharm Thursday Chiwenga claimed the junior doctors are still under the tutelage of the Ministry of Higher Education.

ZHDA argued that this was not true.

"The junior doctors who initiated the strike have been suspended, are wholly qualified doctors who hold two Bachelor's Degrees of medicine and surgery (MB and ChB) from accredited institutions and have graduated from university," the doctors said.

"They have undergone five and half years of intense training including clinical rotations and are not under the Ministry of Higher and Tertiary Education as the Ministry would like the Presidium and the public to believe.

"Government would not be stating that hospitals are at a standstill and chasing after them if these doctors are just students."

While in the early years of Independence government provided grants for the training of students in institutions of higher learning, economic hardships have forced this programme to be stopped and ZHDA said the State has since also ceased to assist trainee medical practitioners.

"Government ceased offering financial assistance to medical students years ago, they did not spend any money on sending our members to school and this was an effort by parents, guardians and sponsors of our doctors," the statement read.

The month-long strike initially by junior doctors has since been joined by middle-rank medical practitioners demanding better working conditions and remuneration.

In the statement, ZHDA accused the Ministry of Health of parading medical drugs provided by donor agencies some with expired dates.

The doctors have demanded through the statement an inquiry into why the drugs have since moved expired while in Natpharm's custody at a time when government is claiming these were procured last week. 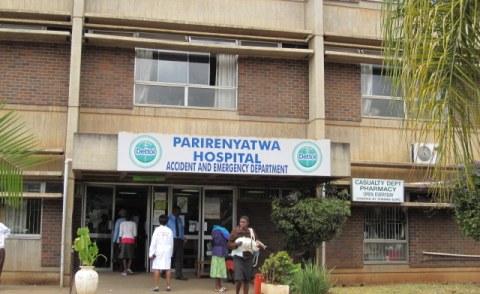 Mnangagwa Cuts Short Holiday Over Doctors' Strike
Tagged:
Copyright © 2018 New Zimbabwe. All rights reserved. Distributed by AllAfrica Global Media (allAfrica.com). To contact the copyright holder directly for corrections — or for permission to republish or make other authorized use of this material, click here.

It's a Date! Kenya to Open Schools on October 19
Infrastructure