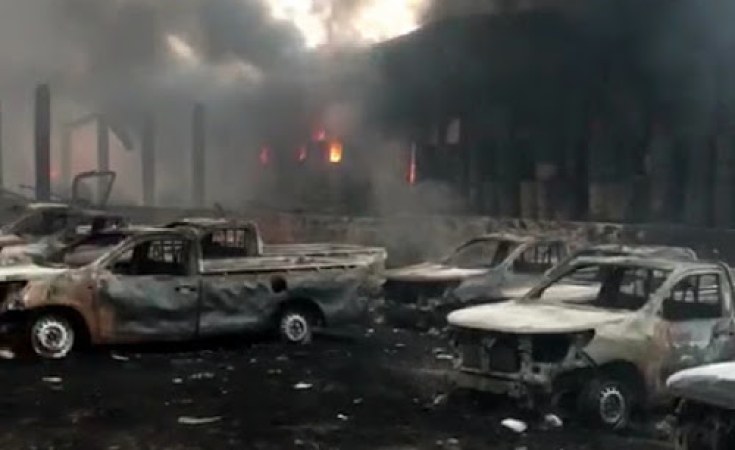 Radio Okapi/Youtube Screenshot
Vehicles in a warehouse of the Independent National Electoral Commission in Kinshasa were destroyed by a fire on December 13, 2018.
Voice of America (Washington, DC)

The United States is demanding the Democratic Republic of Congo release “accurate” election results and warned of sanctions against anyone who tries to undermine Congo’s democracy.

“Those who ... threaten the peace, security or stability of the DRC or benefit from corruption may find themselves not welcome in the United States and cut off from the U.S. financial system,” State Department spokesman Robert Palladino warned Thursday.

Election commission head Corneille Nangaa told reporters in Kinshasa that results of the Dec. 30 presidential vote may be delayed because of a slow vote-counting process.

Nangaa said about 20 percent of the ballots have been collected from polling stations across the vast central African country, which lacks a well-developed road network. He also said the system of manually collecting and compiling vote totals is not helping the process.

The electoral commission had planned to use the internet to collect vote totals. But it gave up those plans after the opposition alleged the system was vulnerable to fraud.

Election results are to be published by Sunday, with the new president set to be inaugurated Jan. 15.

The Catholic Church in Congo said Thursday it has election results showing one candidate clearly winning, but did not say who. A senior church body called on the government to publish accurate results.

By law, only the electoral commission can announce election results in Congo.

Congo has never seen a peaceful transfer of power since winning independence from Belgium in 1960.

Last week’s election was originally scheduled for 2016 but was delayed as Kabila stayed in office past the end of his mandate, sparking protests that were crushed by security forces, leaving dozens dead.

US Threatens Sanctions if 'Voices, Votes Not Respected'

What DR Congo's Flawed Election Means for Democratic Culture
Tagged:
Copyright © 2019 Voice of America. All rights reserved. Distributed by AllAfrica Global Media (allAfrica.com). To contact the copyright holder directly for corrections — or for permission to republish or make other authorized use of this material, click here.