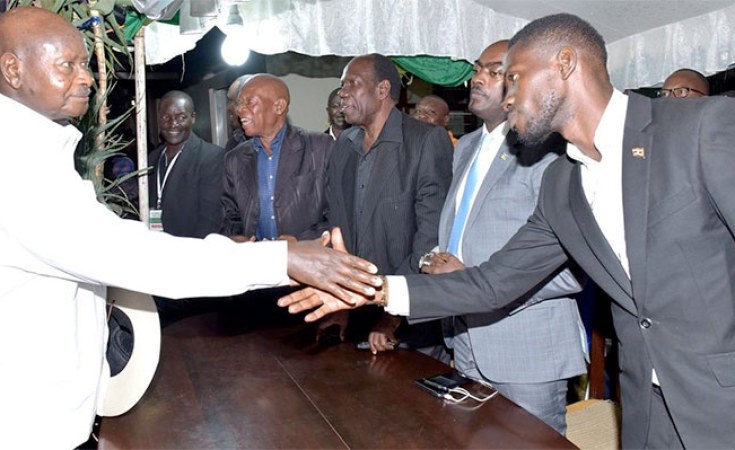 Police descended on Opposition leader Kizza Besigye's country home in Rwakabengo, Rukingiri District, on New Year's Eve with the urgency of man with acute diarrhoea making a pitch for the pit-latrine. They checked every nook and cranny.

When they emerged after about an hour of search, the DPC demanded to know where Quiin Abenakyo was hiding. Apparently, Police received a tip that Dr Besigye was hosting Miss World Africa with her relatives to a dinner and would welcome the New Year from Rwakabengo.

Meanwhile, in Kampala, sources say a team led by operations commander stormed Bobi Wine's home in Magere and ordered the family not to have their New Year's feast with any guests. A perplexed Barbie was told to bring down the mound of matooke she had heaped in a giant saucepan.

"We have intel that MP Kyagulanyi incited Bobi Wine to invite Miss Uganda Abenakyo for a meal here. He didn't write to IGP seeking clearance to hold a food rally with Abenakyo's family." Police spokesperson Emilian Kayima said with the seriousness of an infection.

At a joint news briefing with government officials later, Kayima explained that intelligence reports indicated that Besigye and Bobi Wine were trying to "politicise Miss Uganda" and that they had targeted Miss World Africa to milk her popularity. "Miss Uganda cannot be mixed with politics. The pageant organisers complained to us that some self-seeking politicians were looking to have Abenakyo grace their presence for politicking purposes," Kayima said.

However, when a journalist put it to police that President Museveni had twice hosted Abenakyo and her family without anyone citing politicking, Kayima said he was unaware.

"There's nothing to even compare here," Beti Kamya taking from Kayima. The Minister for Kampala, explained that, at State House, Miss Abenakyo came to present her achievement having represented the country well on the world stage. In Rwakitura, she went to show her obedience having listened to the wise counsel and abandoned the 'Indian hair.'

"The president is a wise fountain who sees far and beyond. If he told me to stop perming this hair [pointing to her head], to stop drawing these eyebrows [twitching the shadow-like eyebrows], I will do it," she said, sending the room into hysterical laughter.

Security minister Elly Tumwine, also at the briefing, said p olice had to act fast to prevent Abenakyo from being the "collateral damage in occupational hazard" of Bobi Wine and the "endless greed of Besigye."

"Abenakyo is a global figure. Why would she be mixing around with a man who holds press conferences under a tree on Katonga Road and this other young man jumping all over the place with arrivalism?" Gen Tumwine said.

"Museveni is a friend and a father but when I want to host Abenakyo, I follow due process. I have all the letters that I wrote and responses from police when I was seeking to host Miss Uganda Africa in the near future," Bebe Cool said.

"For me I have Zuena at home. When I want to host Miss Uganda Africa Abenakyo, I simply look into Zuena's eyes and feel at home. Then other times I just make arrangements with the President and police will okay it, she visits and we feast. No politics. Just peace," he said.

Previous Story
'We Are Not at War With Museveni, We Only Want His Seat' - Bobi Wine
Next Story

'We Are Not at War With Museveni, We Only Want His Seat' - Bobi Wine

British MPs Call for Sanctions on Uganda Over Rights Abuses
Tagged:
Copyright © 2019 The Monitor. All rights reserved. Distributed by AllAfrica Global Media (allAfrica.com). To contact the copyright holder directly for corrections — or for permission to republish or make other authorized use of this material, click here.