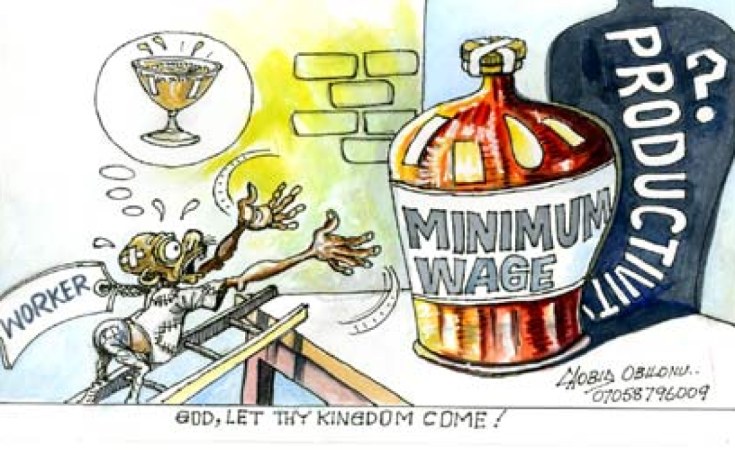 The Nigeria Labour Congress (NLC) has said it will hold a nationwide protest on Tuesday over the president's delay in transmitting the recommendations of the committee on a new national minimum wage to the National Assembly.

The NLC general secretary, Peter Ozo-Eson, said this in a statement made available Monday evening.

PREMIUM TIMES had reported how NLC threatened to embark on a nationwide protest on January 8 if the federal government does not send the tripartite committee's report on N30,000 minimum wage to the lawmakers.

The organised labour issued the threat following President Muhammadu Buhari's statement that a "high powered technical committee" would be set up to devise ways to ensure that its implementation does not lead to an increase in the level of borrowing.

Mr Ozo-Eson recalled that the National Executive Council of NLC met on December 17 and decided it would embark on a nationwide mobilisation of workers and allies ahead of the protest.

"That is, if by Dec. 31, 2018, the bill on the National Minimum Wage is yet to be sent to the National Assembly to be passed as an act of parliament, " he said.

"It is on record that each time we had cause to embark on a national strike, we say so publicly without any equivocation. We still don't understand where the story about a strike commencing tomorrow came from," he said.

He said all state councils, affiliate unions and the civil society organisations have been fully informed and mobilised to ensure the success of Tuesday's mass protests in all the states and the Federal Capital Territory.

He said the public would be informed when a date is decided for the commencement of a strike.

A meeting on Friday between the federal government and labour unions ended without an agreement.

While addressing journalists at the end of the meeting, the president of the Nigeria Labour Congress, Ayuba Wabba, said the rally on January 8 will be determined by Monday's meeting.

PREMIUM TIMES can report that members of labour unions have started arriving Abuja.

The planned protest by the unions is to put more pressure on Mr Buhari, who is seeking reelection, to submit a bill to the parliament for the implementation of N30,000 minimum wage.

Has Nigerian Govt Bowed to Pressure Over Minimum Wage?
Tagged:
Copyright © 2019 Premium Times. All rights reserved. Distributed by AllAfrica Global Media (allAfrica.com). To contact the copyright holder directly for corrections — or for permission to republish or make other authorized use of this material, click here.